No creative should be an island

I am writing this from a large mostly desert island in the middle of the Pacific Ocean. That’s right Australia baby! I am originally from London and three years ago I moved across the world and began working for S1T2 in a new city, Sydney. Three years later I really love the community of creative friends and peers that I have made, starting from scratch.

Everyone knows me to be a friendly, social person, who has many friends. But my first 6-12 months in Sydney were very hard and lonely. No creative, designer or human should be an island. Whether in your home town, a new city, a new country or a new job, we need the perspective of our creative peers and friends to help us on our journey.

So here are my tips, based on my personal experience of uprooting my life and starting again. This is some practical advice as well as my own anecdotes to help you understand that these things take time. 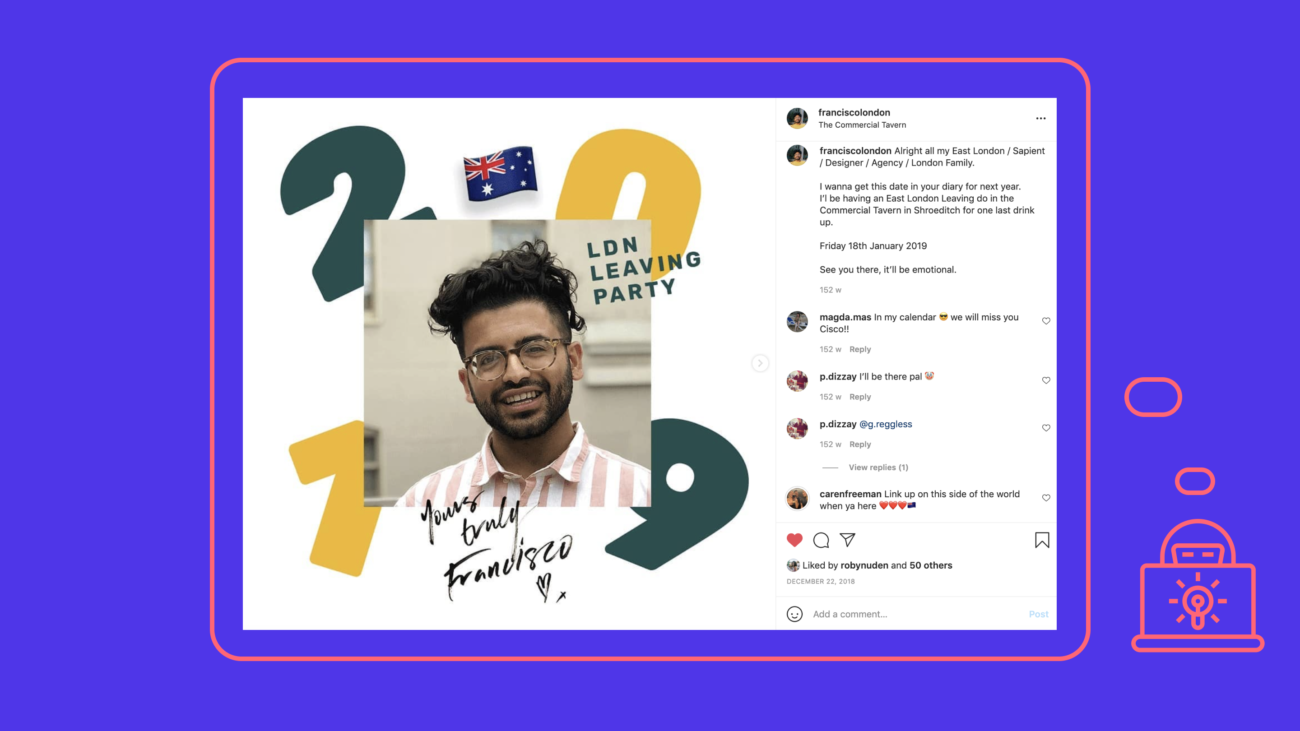 I left London coming from a giant digital agency. If you’re about to embark on a new journey, look within your existing network from advice and contacts. I told everyone on all my social networks that I was heading to Australia, and was given some great contacts to see on the other side. Once I got to Melbourne, I had coffee meetings and pints with friends-of-friends who would become my new Australian designer buddies. Some of them had contacts for jobs, and some of them were just great to chat with about the industry and culture in this country.

I eventually moved cities from Melbourne to Sydney, but I have stayed in contact with a few of those first friends who I  still reach out to for advice and catch ups. I am so grateful for those initial introductions; they really helped me feel a little more at home during my first month in Australia. 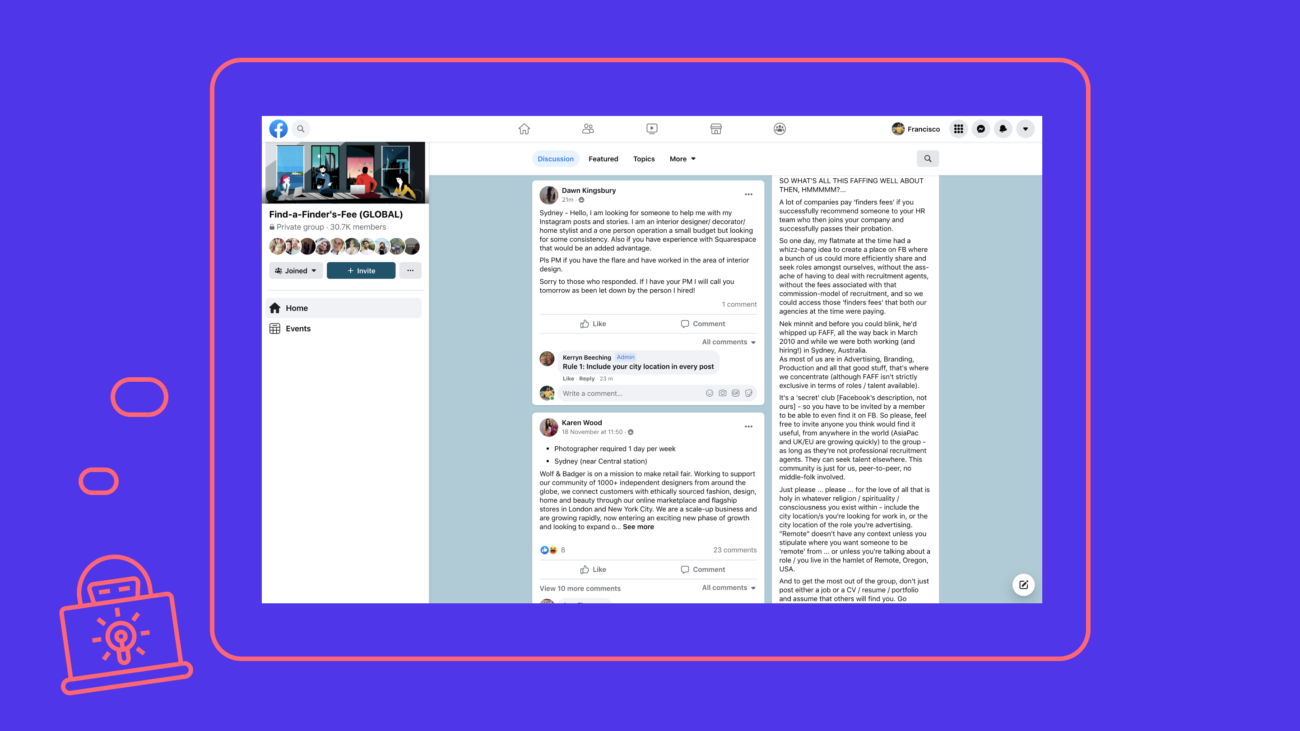 The reason I landed in S1T2, and call Sydney my home instead of Melbourne, is Facebook. Yes, I found my amazing job, and amazing company through a Facebook Group. On a tip from one of those new friends I mentioned, I learned about the  Freelance Facebook group. I posted my portfolio there and was contacted by my future colleague, Nat.

I won’t deny that Facebook, Linkedin, and Instagram can be bad for our mental health, but there are also many opportunities when used wisely. Even beyond work, I’ve found that coming to Sydney Facebook was key to finding accommodation, as well as events and groups of interest. These days, the cool thing that you’re after often isn’t found on Google or advertised by the establishment. The cool jobs, gigs, and events are found through word of mouth – and often inside a secret Facebook Group. So keep an open mind. 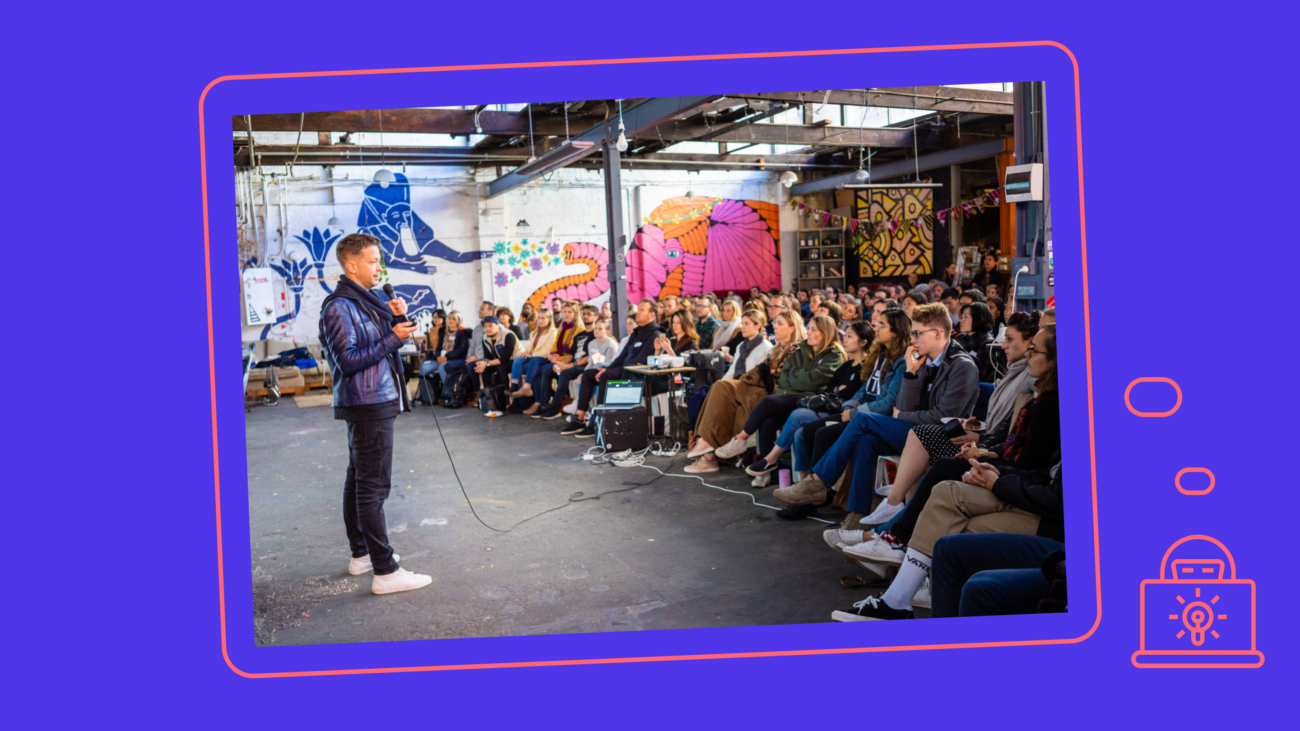 In London, I used a website called Design Calendar to find design talks – and if you’re there, you should too. It was there that I found some frequent global talks that happen in many cities around the world. One of them is Creative Mornings. I’d been to a meetup or two of theirs in London, then in Melbourne, and now  a few in Sydney.

My personal top tip for going to talks is to not just sit down and hear the inspiring talk. Instead, you know that awkward 15 minutes before the speakers begin? Take the time to say hello to the people sitting next to you. The truth is, they feel equally awkward and shy. But they are your peers. They came for the same talk, and you can safely assume they might be interested in the same things as you. Hang out with them after the talk, exchange Instagrams.

One example of when this worked out for me. Years ago I was having a bad time in my job. Attending a conference, I got to talking about it to the guy I sat next to.  He told me about his company and gave me his email address. I emailed them my portfolio and ended up with an interview. I had spent that whole year thinking I was a terrible designer, but having that exchange with a designer outside my company gave me the confidence to believe that maybe I wasn’t so bad after all. 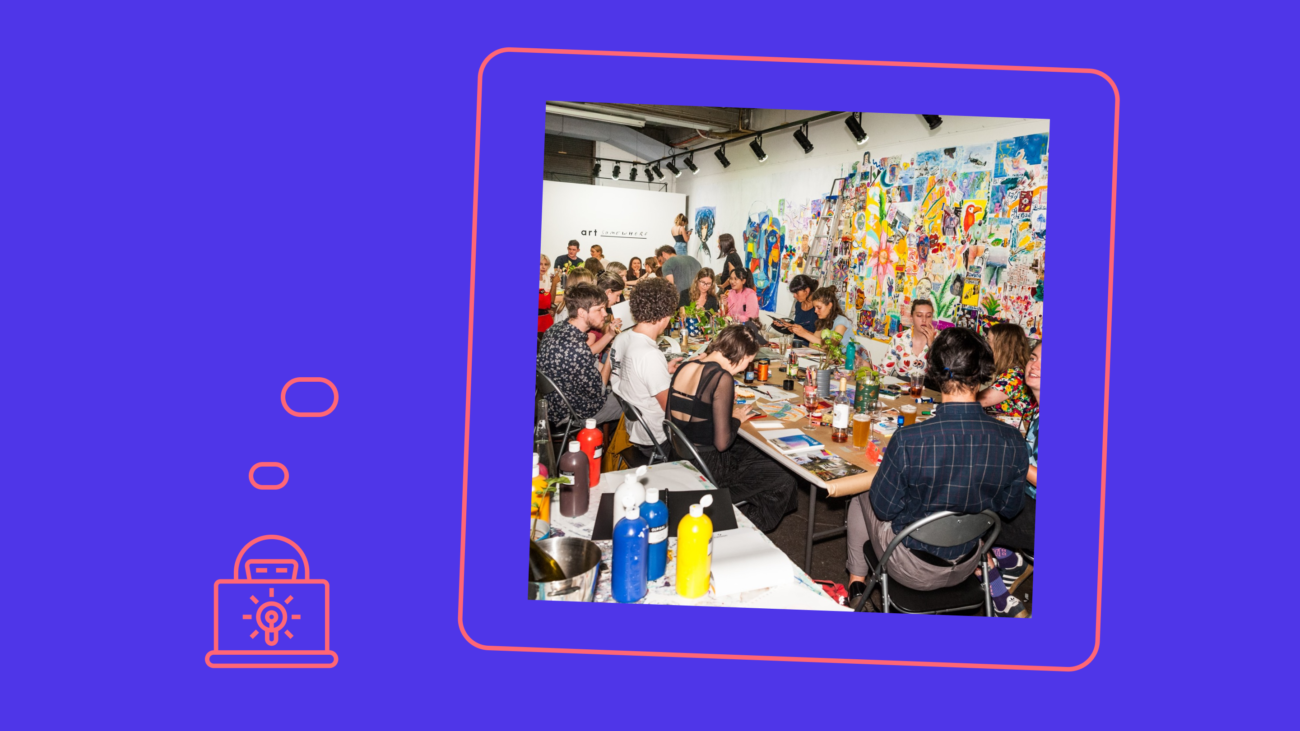 I met my very first friend in Sydney through a beautiful meetup called Art Somewhere at 107 Redfern. The idea is that you pay 5 bucks and you can just hang out and make anything you want. Being in an open, accessible, creative environment made me feel so at home and at ease: these were my people! I sat across the table from someone who is now my French bestie and Newtown homie, Pauline. After what felt like forever, I finally had a friend. And not just any friend. A creative one, who I could talk to about work. A European one, who I could talk to about being so far from home. And a local one, who I could go to the pub down the road with. Nowadays I’m fairly regular at Life Drawing. While it might not be directly connected to my work, these kinds of interest groups have been a way  for me to reconnect with what I love, putting paint to paper, and meeting like-minded creative people. 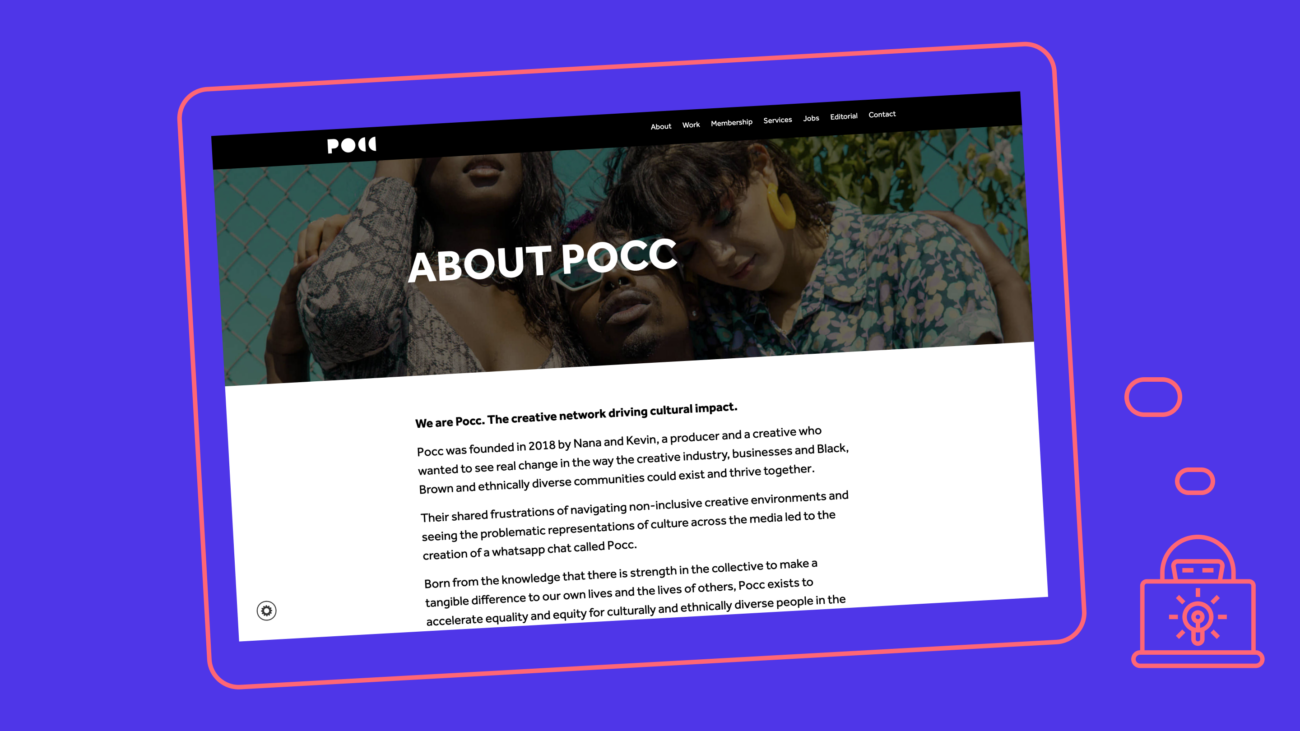 05  Get involved in a diversity group

Struggling with getting into your industry? There is a group for you! Whether you are underrepresented in your gender, ability, heritage or race, there are people that have come before you. And, chances are, they’ve made a group. earch for what you're looking for online, and you’ll find it.

In London I was part of a group called People of Colour Creative. It started as  a WhatsApp group for the black staff members in an agency to discuss the frustrations. It grew into a giant WhatsApp group with people beyond that agency, and then into an industry-recognised organisation. Again, these types of groups start organically and often come together on the internet. But they can really help withinside information and advice, from job opportunities to just giving you a safe space to voice your concerns. 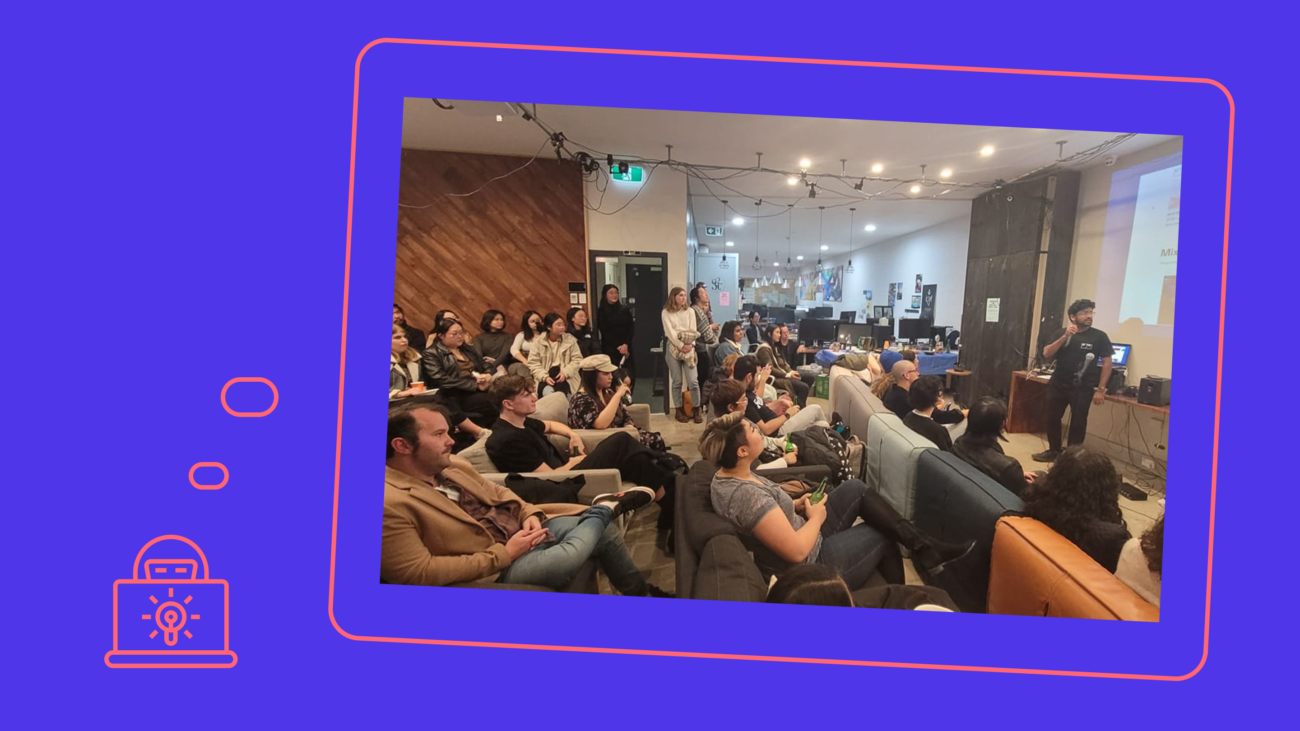 As well as Creative Mornings, another global meet up is The Design Kids. I went to lots of Design Kids meetups back in London and here in Sydney. They are geared towards young graduates, and are a great place to make friends and network if you’re a new face.

In London I hung out after a talk and wound up speaking to the organisers, who invited me to do my own talk at the General Assembly. In Sydney, I became friends with the hosts of TDK Sydney, which inspired me to curate my own talk, which was a game-changing experience. My point is, as well as attending these events and talks, keep an open mind to one day getting on that stage. 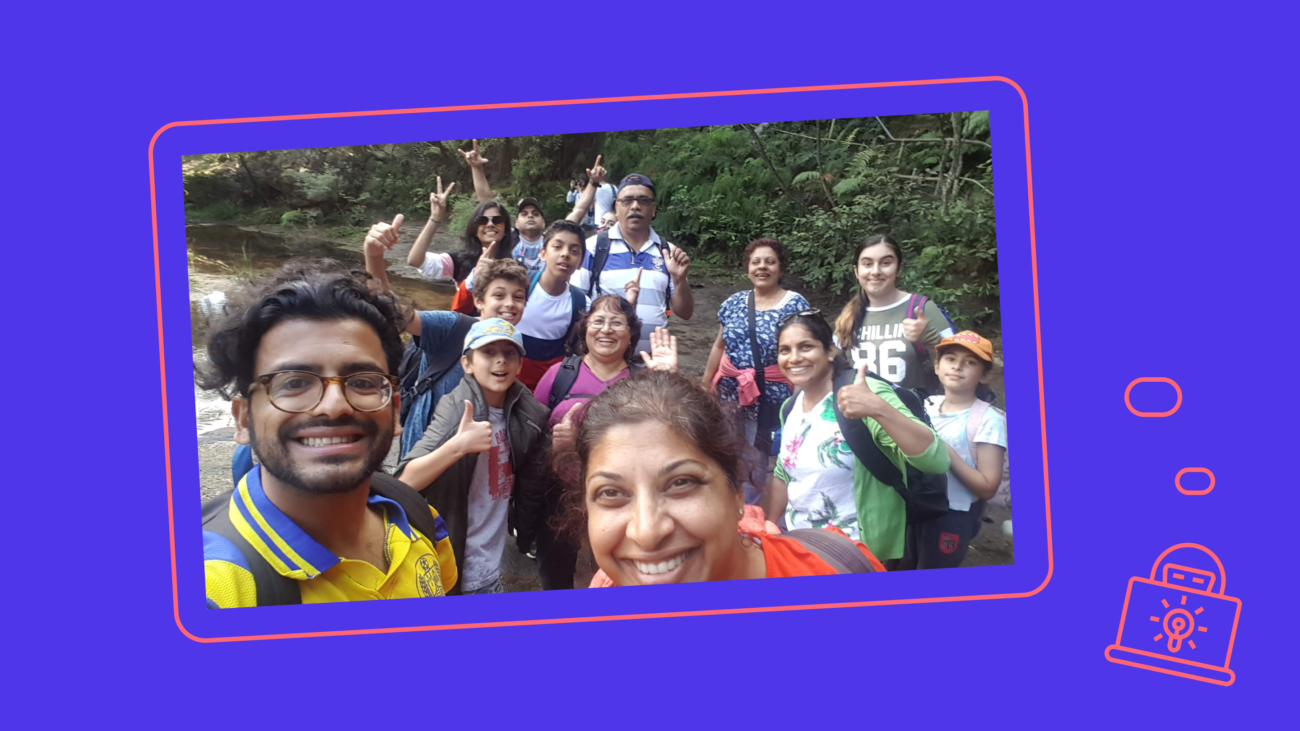 07  Don’t forget about your family

An unsung hero of networking is your family: your original network of mentors and peers. Some of you out there might be so connected that your parents have friends in the industry you want to work in. But even if not, having a foundation of trusted people is always a good thing. It might something as simple as someone to visit on a Sunday for a cup of tea and a cha.

Coming to Australia, my dad introduced me to a distant aunty and cousin of my grandma. Although that didn’t necessarily help in a work sense, it gave me a second home. A place to feel safe and comfortable whilst on the other side of the world. Going through your creative journey, you will need more than just your cool, young hipster friends. Connecting with people with some real genuine life experience and perspective will help your mental balance. 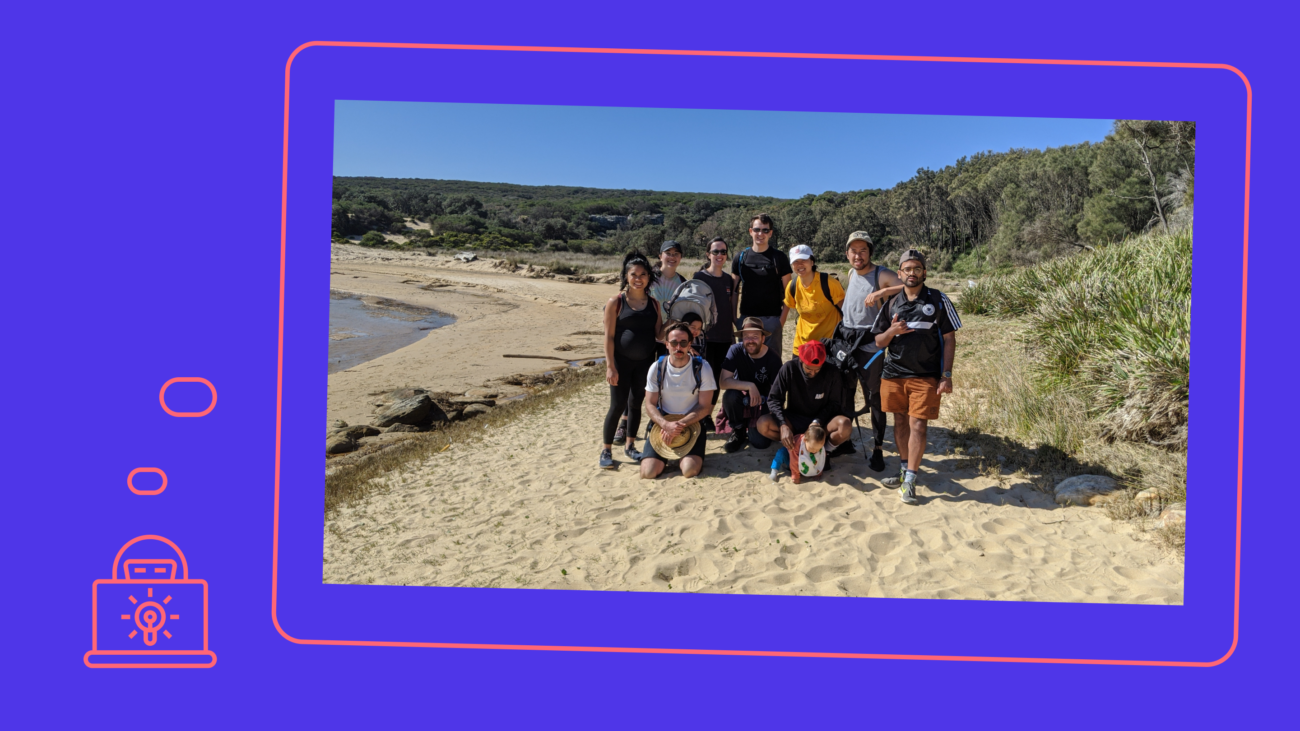 I’ve worked in huge agencies, with buildings of young people. And I’ve worked in small agencies, where everyone is like family. S1T2 is one of the latter. I really value my relationship with my company. We have a real understanding of our peers as people, and make acceptances for what’s going in people’s lives. My reason for being away from home here in Australia is to work as a designer, so my relationships with the people I work with are ones that I foster and value most.

It’s easy to mistake people for their job titles, but we are more than just designers and developers and everything else. Getting to know people outside of their craft will help to build better connections, will help you to understand new perspectives, and challenge your stereotypes. At S1T2 we like to share our personal hobbies and interests. It’s fascinating seeing what people are passionate about outside of work, and you understand the dreams and aspirations of the people the you work and collaborate with every day. 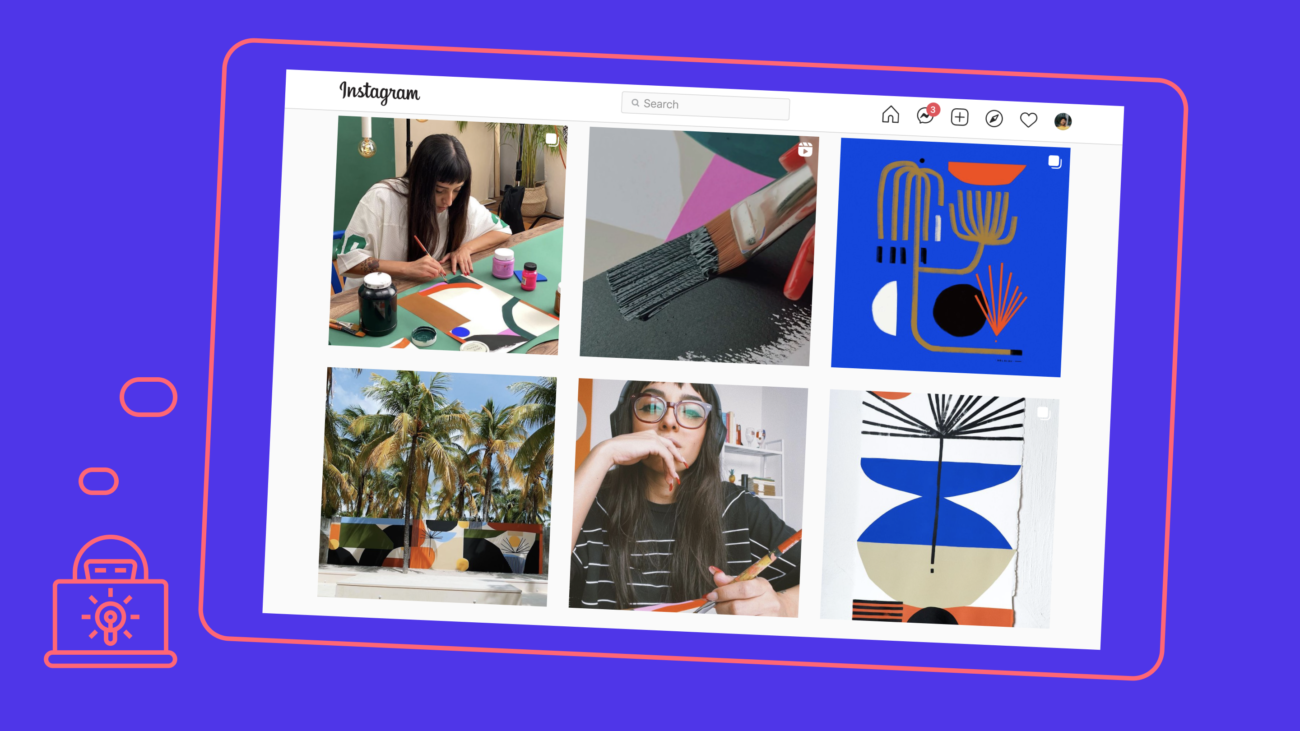 Instagram is a hub of creativity and one you can leverage in building your own network. For example, I made friends with Karina after seeing her sick work on FBI Radio’s Instagram page. I messaged her to hang out digitally over lockdown, and soon found out we lived down the road from each other. Another amazing friendship I made on Instagram is with my Mexican homie and legendary artist Hola Lou. I made friends with her years ago after hearing London rap music on her Instagram live. Since then we have supported each other, sent messages of support, and more. I really appreciate the difference in perspective that she and other friends I’ve made online give me. 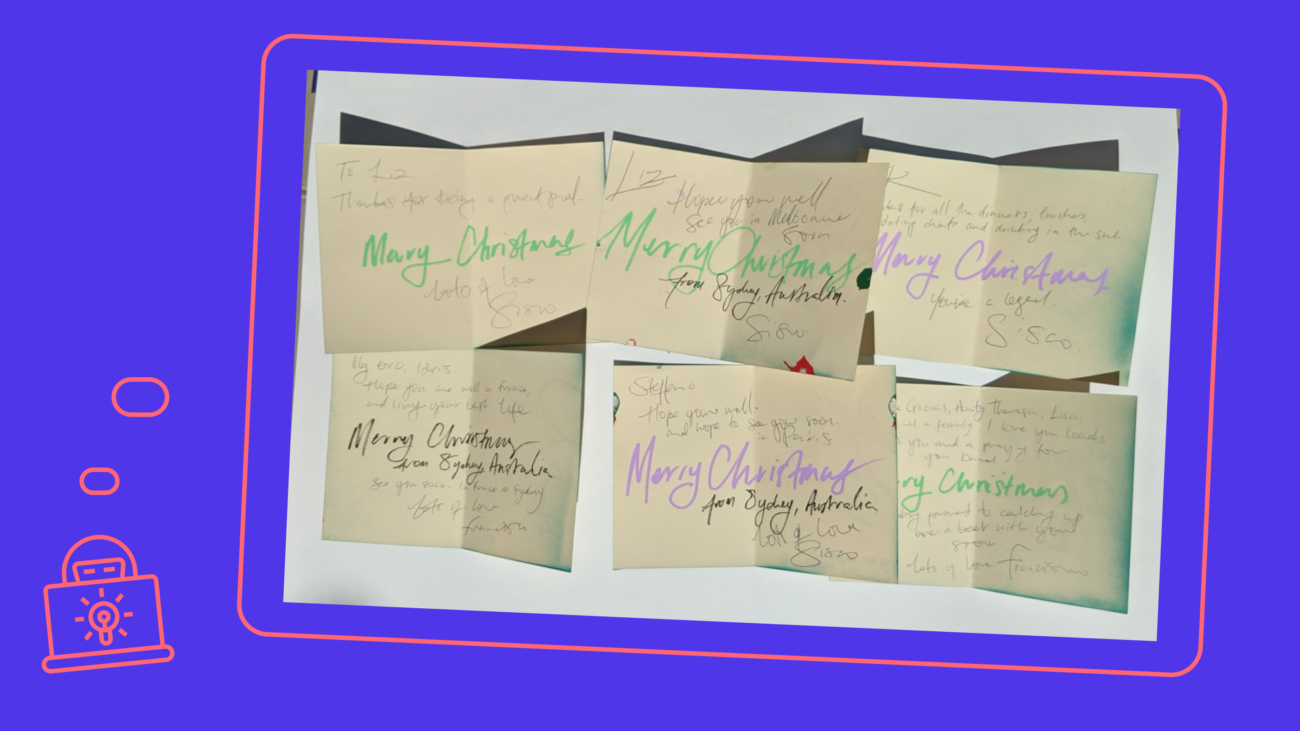 Once I made my first friend, it felt so much easier to make more. After three years in Sydney, I have even become a connector for other creatives – introducing people who I think would be good to hang, inviting my creative friends to dinner, or hosting drinks after my design talk.

I’m using the word network, but really, these are my friends and peers. Over time I’ve realised that your friends are your network. I check in on them, invite them to the pub, wish them happy birthday, and send them christmas cards. Your mate from uni who you went clubbing with is now CEO of her own PR company. The guy you kicked a football with is now a Youtuber with over 100,00 subscribers.

At the end of the day, these are both your friends and your connections. Don’t get me wrong, it’s not about being transactional. It's about having a real relationship that you invest in over time; it's about being human and checking in on your buddies. 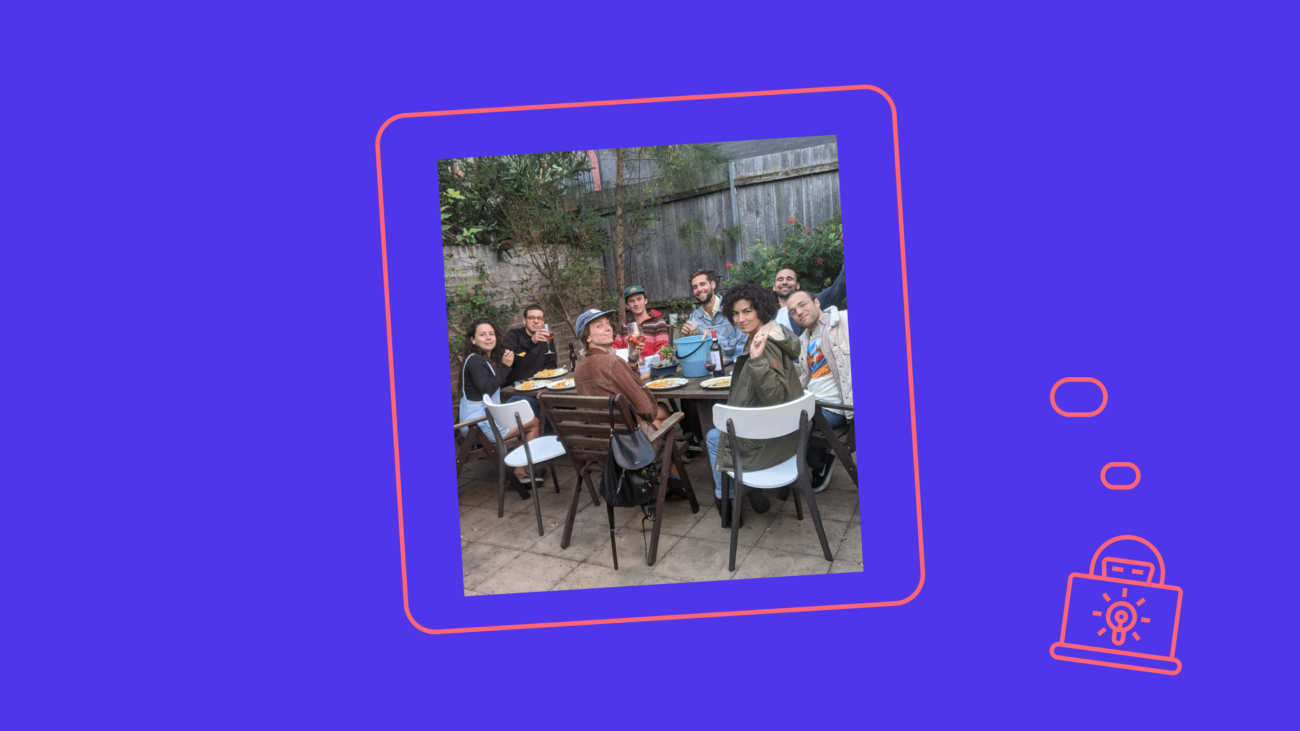 To be creative is to be human

If there’s anything I’ve learnt in my journey so far, it’s that being creative is being human: a whole, open, well-rounded one. We all need friends, and peers that we can talk to about our careers and dreams. Having that ecosystem will help in your journey. It will help you to keep balanced when you're feeling stressed out. It will help you to have perspective when you're making big decisions. And the right people will keep you inspired as you continue on your own creative journey.

This is the first of many times you’ll be hearing from me. Until next time you can check out the  resource page I’ve put up on my portfolio. And don’t forget to subscribe below so you can be the first to know when me or another legend here at S1T2 has something to say.