For hundreds of years, Japanese art and storytelling has been captivated by yōkai – supernatural monsters, demons and extraordinary household objects. In Hiroharu Itaya’s narrative handscroll ‘Night procession of the hundred demons (Hyakki Yagyô)’, these spirits come to life in a fantastic parade of mirth and mayhem, wreaking havoc on the human world.

And come to life they do – in more ways than one – through our latest work for the Art Gallery of NSW Japan supernatural exhibition. Transforming Itaya’s scroll into the Yōkai Interactive Touch Wall, we invite audiences to explore this rich supernatural world like never before.

A modern twist on historic art

At its heart, ‘Night procession of the hundred demons’ is a ghost story. It’s a playful portrayal of long-abandoned temple objects that transform into mischievous demons, creating chaos in a nearby village. With intricate illustrations and a sense of movement as the scroll unfolds, its goal is to entertain and delight

You can really see the intricacy of Itaya’s yōkai in this close up of ‘Night procession of the hundred demons (Hyakki Yagyô)’.

Shown alongside this work, the Yōkai Interactive Touch Wall updates the rich stories of the Japanese supernatural for a contemporary audience. Mirroring the handscroll’s 6m length but extending its height from 30cm to 2m, the touch wall immerses visitors in a supernatural world they can not only see (through projection-based animations) but also touch (through conductive ink). 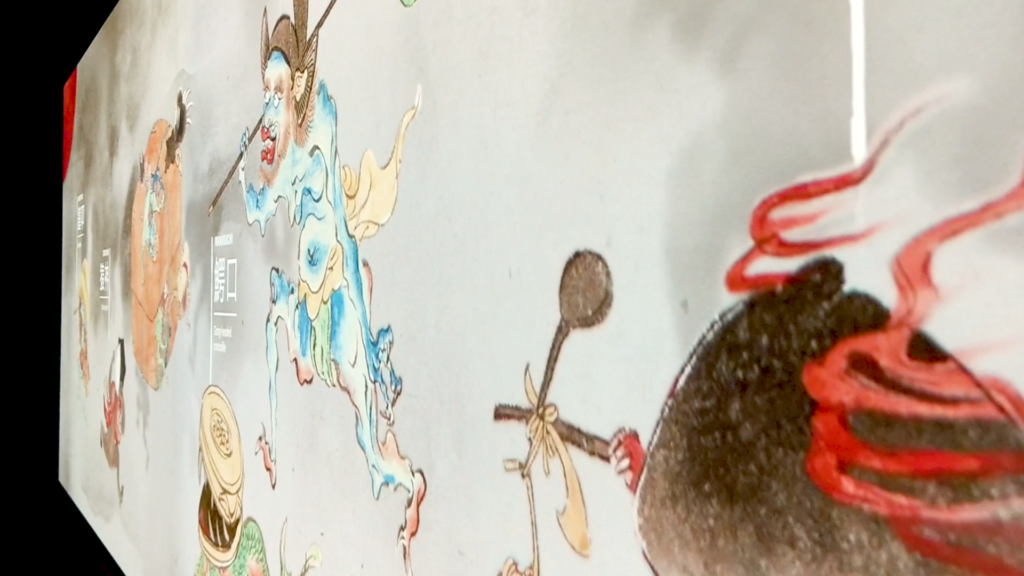 Our large-scale animations use motion and interaction to bring Itaya’s yōkai to life.

Bringing these characters to life gives audiences the opportunity to experience Itaya’s vision in a tangible, visceral way. It’s one of the many ways technology can seduce us into engaging with the heart of a story that – especially in today’s busy world – we may otherwise miss.

The way we brought Itaya’s yōkai to life depends largely on our careful animation of each character. While this was an opportunity to explore the deeper meaning of each yōkai, it came with concerns about how to represent an existing work respectfully. The goal was to use animation to extend – rather than appropriate – Itaya’s scroll into the digital realm.

Scrolls such as Itaya’s would have originally been unscrolled as the story was told and are often considered the precursors to modern day animation. Bringing not only the characters to life but also the atmosphere of the parade seemed a natural fit.

Indeed, our goal was to maintain the playfulness, spirit and humour of the original work. Drawing inspiration from Japanese traditions of narrative handscroll and Noh theatre, the Yōkai Interactive Touch Wall blends illustration and motion, the physical and the digital, into a contemporary expression of the supernatural. With animations that extend, rather than replace, the movement of Itaya’s yōkai, the stories and personalities of these supernatural spirits come to life before the audience’s eyes.

Practically, this approach of trying to ‘co-create’ this new work with the original artist required a lot of patience. Not only was there extensive research, but also the painstaking process of recovering pieces of the original scroll and filling in the gaps to make the animations work. We’ll cover a more in-depth breakdown of the animations in an upcoming blog, but suffice to say that even the smallest of movements was imbued with detail and meaning from Itaya’s original work. 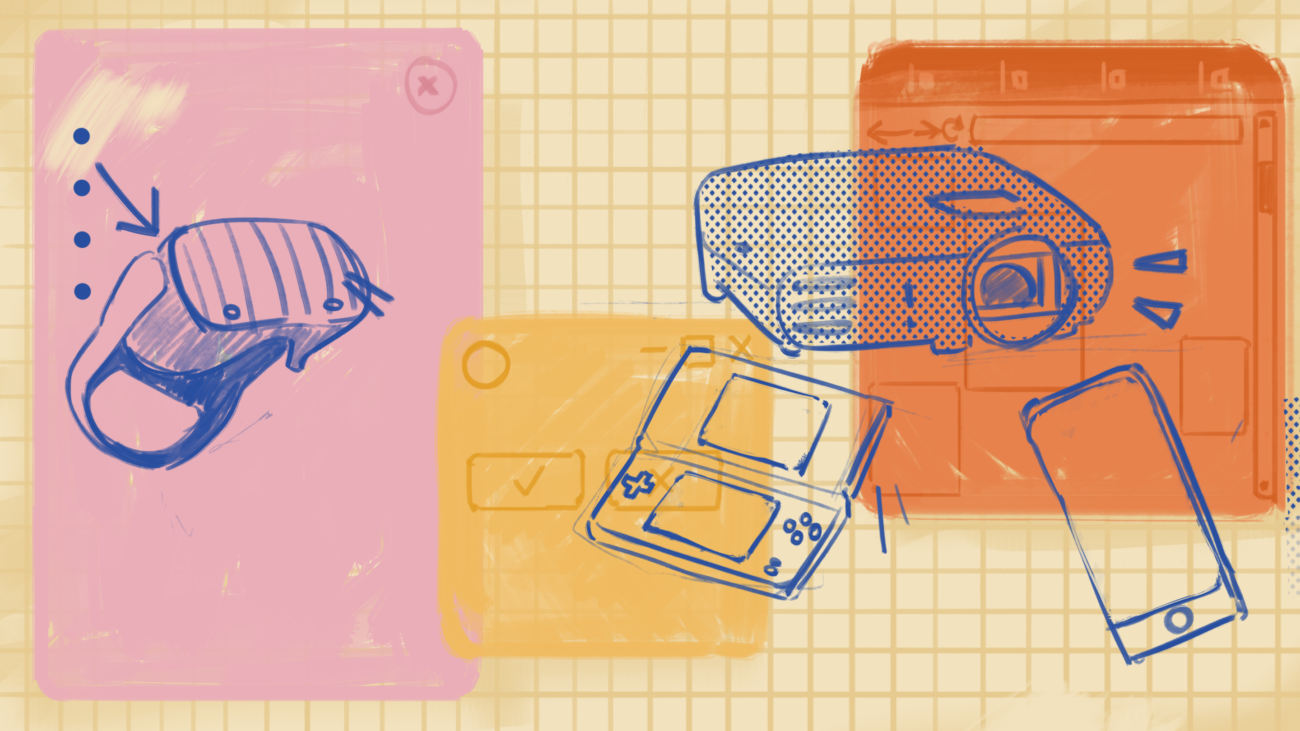 While the almost life-sized animations draw audiences into the supernatural realm, it’s the touch wall’s interactivity that creates a truly memorable experience. Captivated by the large-scale projections, audiences find they’re able to interact with the yōkai directly through interactive touch points. Screen-printed onto the wall before its final coat of paint, these circles of conductive ink are all but invisible, creating a feeling of magic as the yōkai come to life at a single touch. 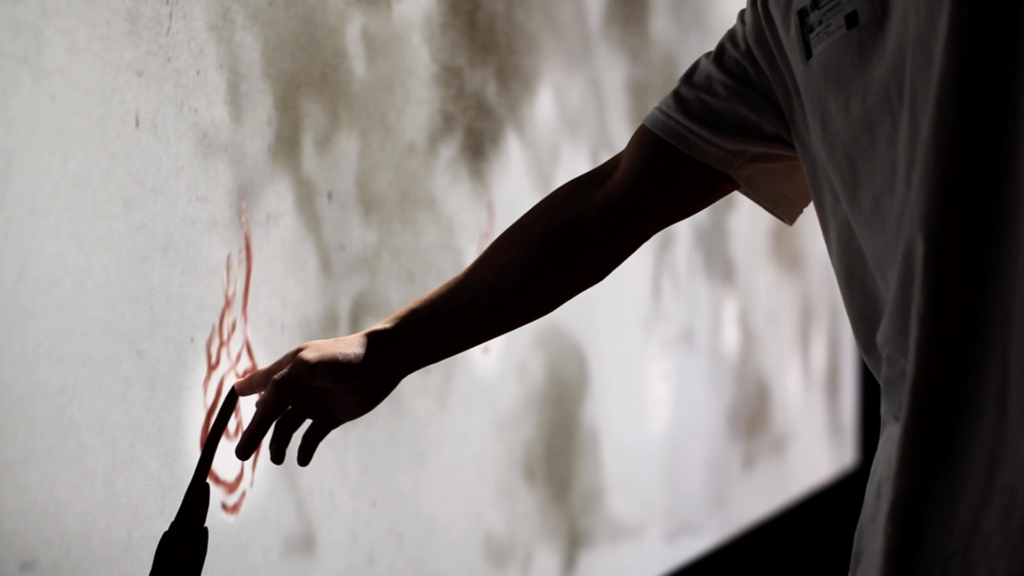 After some research, we decided an animated kaika (strange fire) would be a good mechanism to encourage touch interaction.

Although there are only six interaction points on the touch wall at any one time, there are actually four cycles of animations – that’s a total of 24 yōkai to explore. This extra dimension of interactivity rewards repeated interaction, encouraging deeper and deeper engagement with the work.

Having the interaction change the more audiences engage gives it a certain kind of magic. Your interaction begins a conversation with this forgotten world – the more you engage, the more you uncover.

A supernatural world at your fingertips

Over the course of the three-month Japan supernatural exhibition, the touch wall has seen over 362,000 individual interactions, with one conductive ink touch point triggered every 11 seconds.

We believe that digital interactions within exhibitions should always enhance the visitor’s experience with the original artwork, rather than being a distraction. 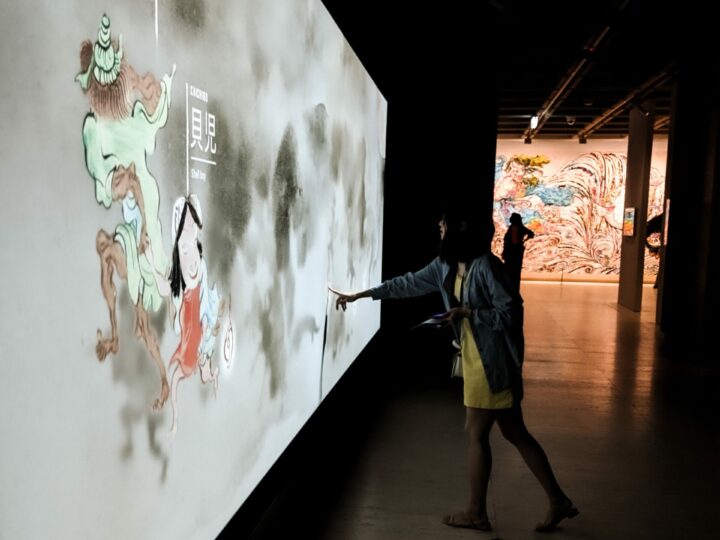