You’re driving along with your friends when a new song starts – your song. You look at each other, and someone reaches for the volume. They turn it up and you all rock out, inhibitions be damned.

It’s an experience we’ve all had, and one we wanted to recreate when Kia asked us to create an activation for the Australian Open. The goal of the Kia Caraoke Studio was to turn the classic test drive on its head. Jump in and you’d not only have a chance to rock out to Jet’s ‘Are You Gonna Be My Girl’. you’d also be joined by AR versions of tennis pros Thanasi Kokkinakis and Daria Gavrilova, have your performance scored in real time, and receive a video recording your epic karaoke performance for all time. 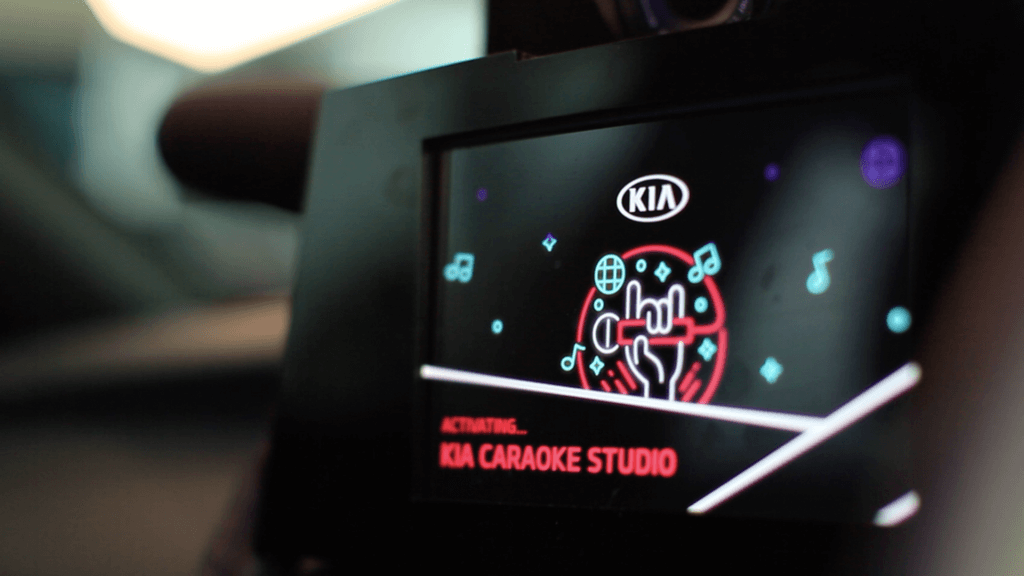 Bringing this experience to life was an exercise in integration and logistics. From a user perspective, it was deliberately simple. We worked hard to make sure all visitors had to do was enjoy themselves. But behind the scenes was a different story. From bespoke lighting sequences to automated content distribution, this was an experiment in integrating many individual systems into one seamless experience.

First up, we had to get our audience in the car and ready to sing. That meant we had to create an environment where people had the confidence to sing their hearts out. We did this in two ways: a) making the car as private as possible, and b) transforming the car into an over-the-top karaoke studio. 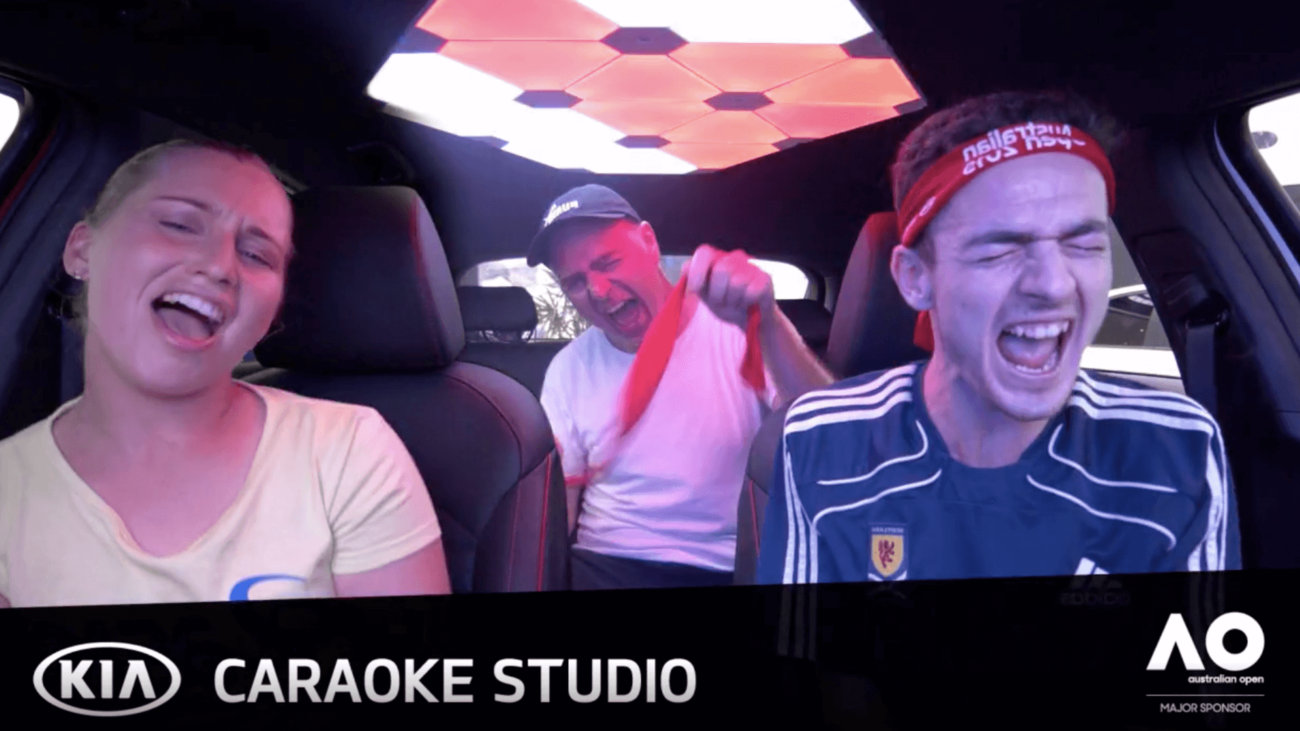 Solving the privacy problem was pretty straightforward: we got the darkest window tinting we could find. Getting people comfortable enough to sing was a little more difficult. There were the little things, like allowing visitors to form groups with their friends and giving them silly props. But the main way that we solved this problem was through lighting.

The goal of the lighting was to help people forget they were in a car. Instead, we wanted them to feel like they were in their own little karaoke booth, complete with crazy disco lights. To do that, we attached Nanoleaf light panels to both the front and back windshields and the roof to create an immersive studio. We then used a DMX controller to program animated sequences that matched the music and drama of the experience.

The install that tested every adhesive we could get our hands on.

In addition to giving people the feeling that they were in a karaoke studio, these sequences also acted as cues about how to interact. For example, the sound and lighting at the beginning of the experience got our soon-to-be karaoke stars warmed up and ready to perform by mimicking the ‘loading’ of a game. 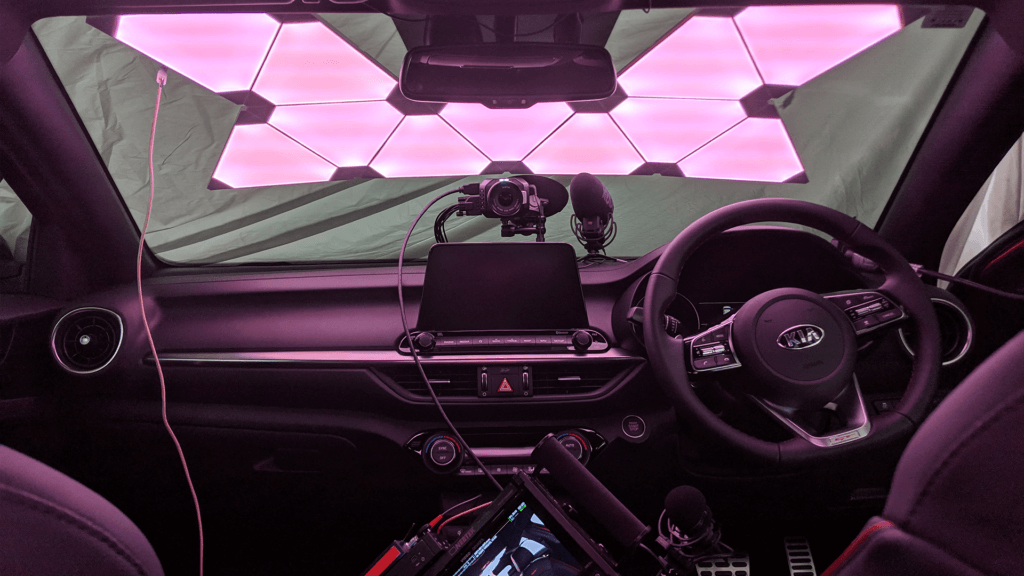 Next up on the feature list was how to get the tennis stars in the car with our audience. The answer? Augmented reality, brought to life through some clever planning. While this wasn’t a traditional use of AR, it did help us create the illusion that visitors were singing with tennis stars. To actually create that illusion, we needed to make two videos (one of the tennis talent and one of the live performance) and then have those two videos merge live into the final takeaway video during the event.

The first video was filmed prior to the event in a more traditional shoot. This meant that we again had the problem of getting people in the mood for karaoke in a less-than-ideal environment. To do that, we had the team jump in the car to jam out with Kokkinakis and Gavrilova. After editing out the crew and adding some game graphics, we isolated the footage so only our tennis players were left. 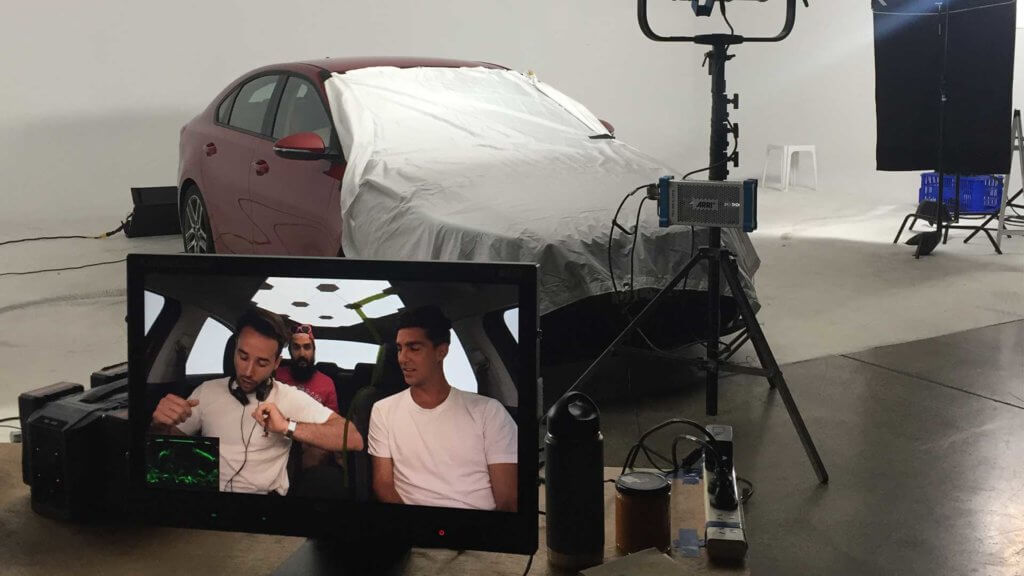 Getting our karaoke on behind the scenes.

The resulting footage was then ready to be combined with the live footage captured in the car. At that point, we also added scoring mechanisms for pitch and performance. Pitch was measured by how well the live audio in the car matched the pitch of the original song. Meanwhile, performance was calculated based on pixel matching how much movement visitors were making in the video image. These metrics were given to audiences in real time during the experience, and combined into an overall score by the end. 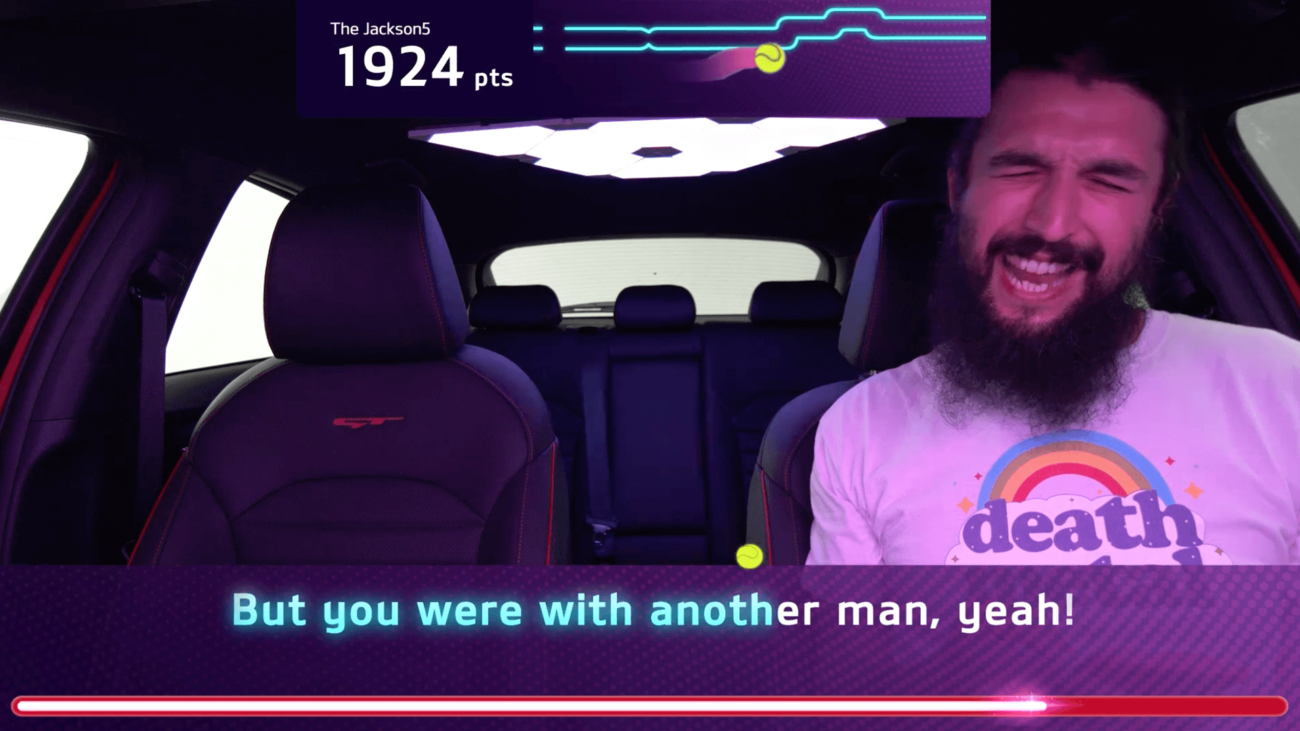 Systems that brought the idea to life

And that brings us to the actual event. Here, another three systems came into play: the tablet application, the automated emails and the microsite. At the beginning of the activation, brand ambassadors armed with a specially developed tablet application would register visitor data into teams. This same tablet application could then trigger the start of the interactive experience, automatically linking each session to the user information of the relevant team.

At the end of each caraoke experience, a short video of the performance was uploaded to a geo-locked microsite. A link to this site, along with an image from their performance, was then sent to visitors through an automated email. From there audiences could share their performance across social media, effectively extending the life of the experience both for those at the Open and those watching along at home. 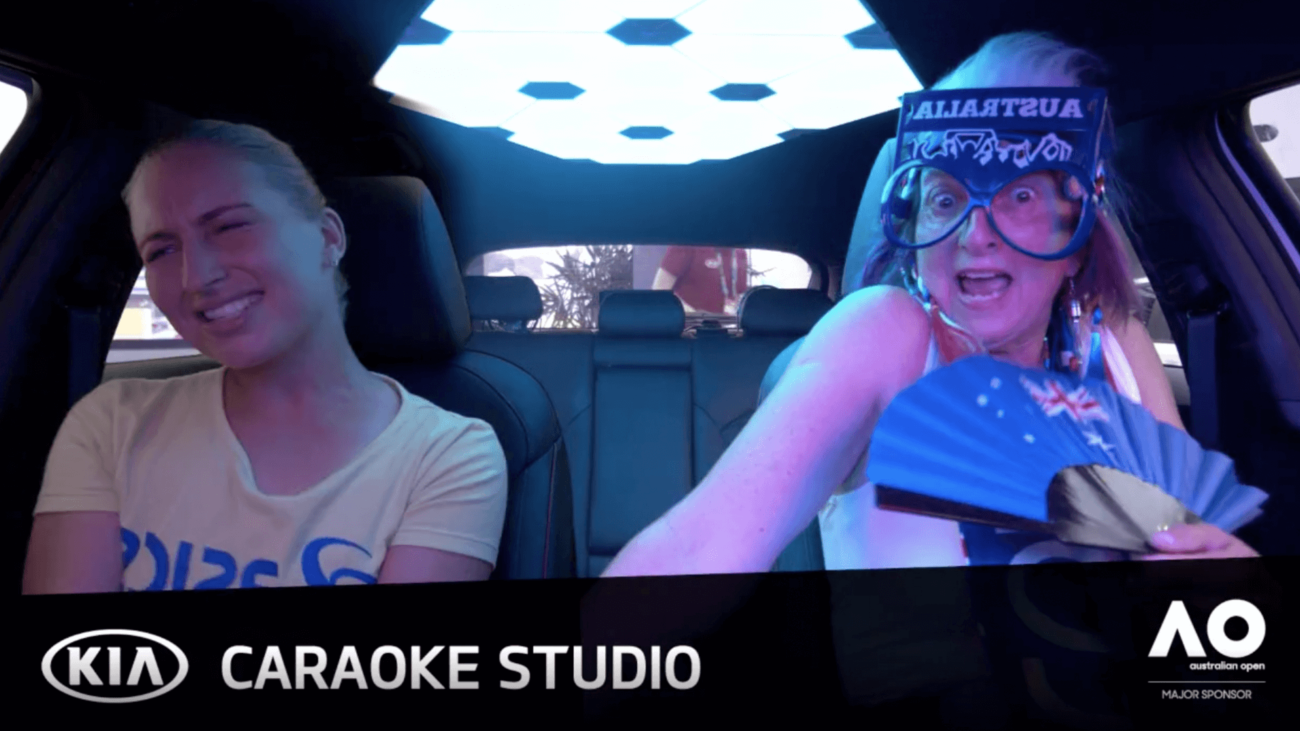 All in all, Kia Caraoke was live at the Australian Open for 15 days. During that time over 9,000 individuals were able to test their karaoke skills as they sang along with tennis stars. Even beyond the Open, the experience remained popular with over 15,300 views on the microsite.

And if you’re keen to know more, take a look behind the scenes in our interview with the production team. 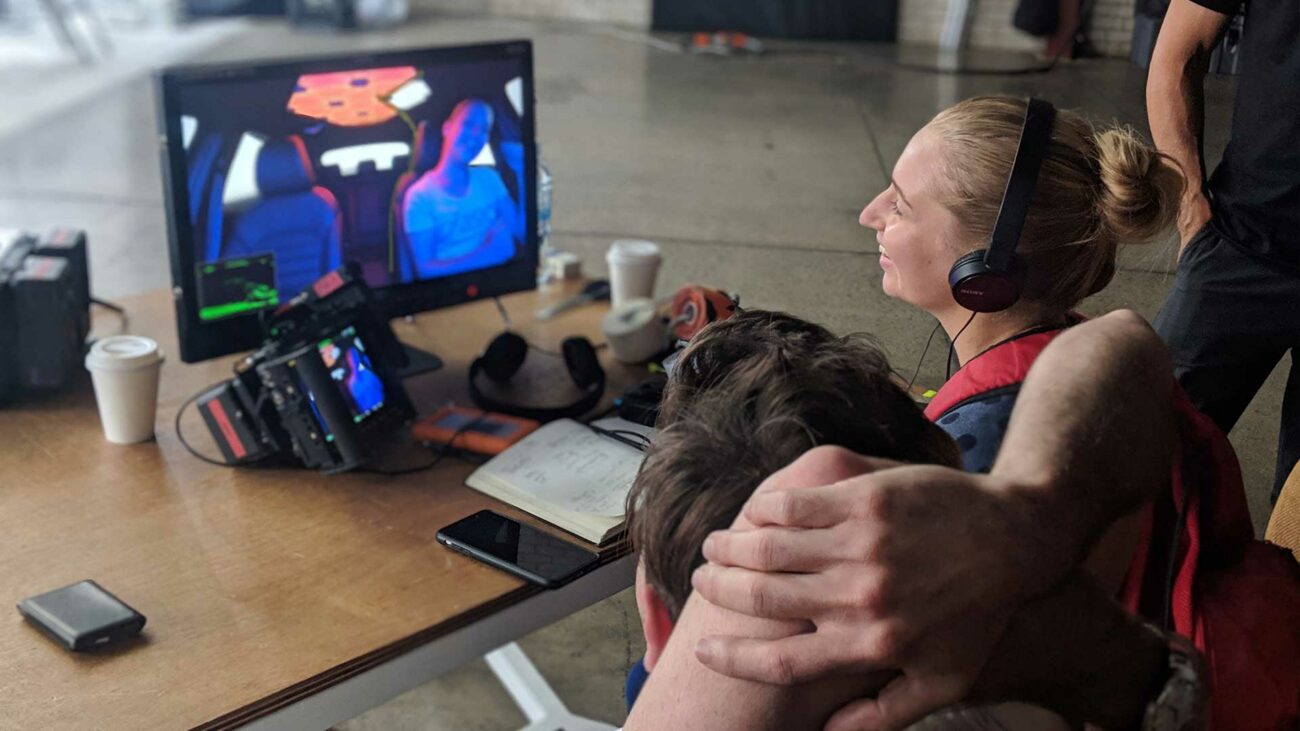 The making of: A karaoke experience for #AusOpen
Read the blog
See all blog articles
Welcome to the party