As part of Adobe’s ‘Random Acts of Creativity’ program, we created the Adobe Heart Tree, an interactive artwork that brought a fallen tree back to life by giving it the ability to read the human heart. Placing their hand on the tree, visitors activated a reflective pulse sensor to capture their heart beat. This rhythm was then translated through creative technology into a spectacular show of light and sound inspired by the elements of nature unique to the beat of their own heart.

Adobe’s ‘Random Acts of Creativity’ was designed to inspire spontaneous moments of creativity in the monotony of the everyday. As part of this public art installation program, we were asked to create an interactive artwork that would symbolise the creative spirit found in every person. Visualising the link between creativity and the heart, the experiential marketing installation would prove that a creative moment can be found just about anywhere. 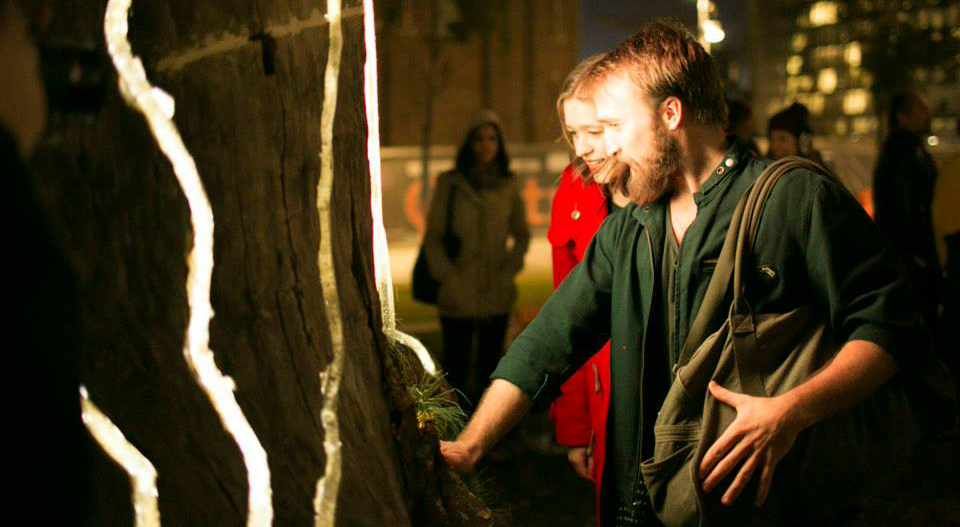 This was an experiential marketing experiment designed to tell the story of where our creativity originates and thrives. Using a visitor’s heartbeat to breathe new life into a fallen tree, we would embody and give life to an individual's creative force using only their will to create. 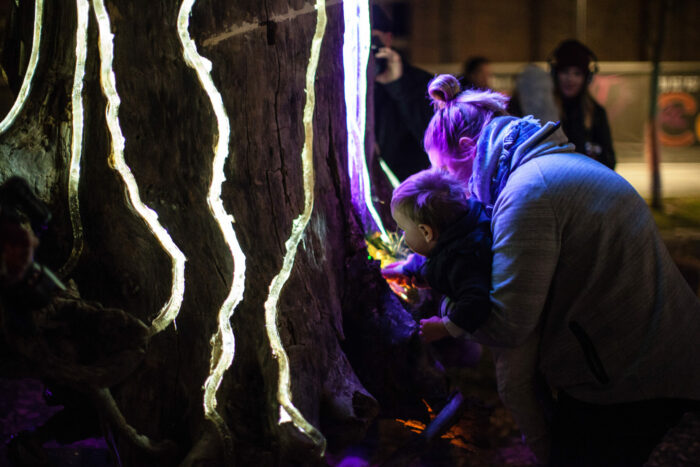 Adobe creates art with your heartbeat
Read the blog

The connection between heartbeat and interactive artwork would then release a powerful, personalised show of light and sound. Based on an individual’s heartbeat, and inspired by the elements of nature, this unique audiovisual display linked creativity and the heart with a simple human touch, exploring the age-old question: “Where does creativity come from?” 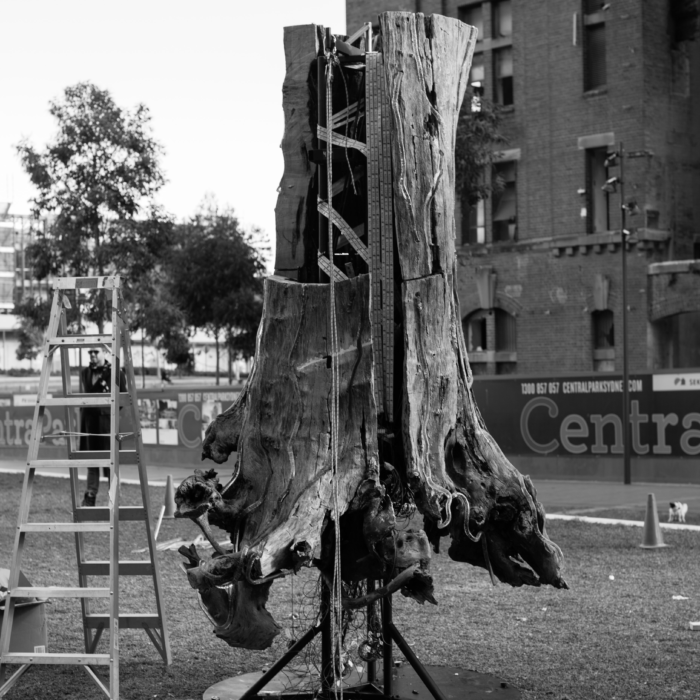 Creating an authentic connection between visitors and the Adobe Heart Tree was crucial. To do that, we made sure to conceal all the creative technology components within the tree’s natural form. This included multiple reflective pulse oximeters to capture a visitor’s heartbeat through LEDs measuring changes in blood flow, along with infrared lamps to ensure their hands were warm enough to activate the sensors even on cold winter nights.

Microprocessors – also hidden within the tree – then passed this data to an external computer to translate the heartbeat into a designated BPM range. This BPM rhythm would then be re-appropriated into the unique audiovisual experience. For this, addressable strip lights were used to illuminate the Adobe Heart Tree internally while strategically placed speakers saw the hollow trunk become an amplifier for the audio experience.

Creatively, we strived to demonstrate that everyone possesses the power to create, if only they have the heartfelt desire to do so. This made personalisation crucial to the overall experiential marketing activation. That in turn meant we needed to create a large enough library of DMX lighting effects and music compositions to reflect the individuality of people’s heartbeats without the resulting show feeling generic. 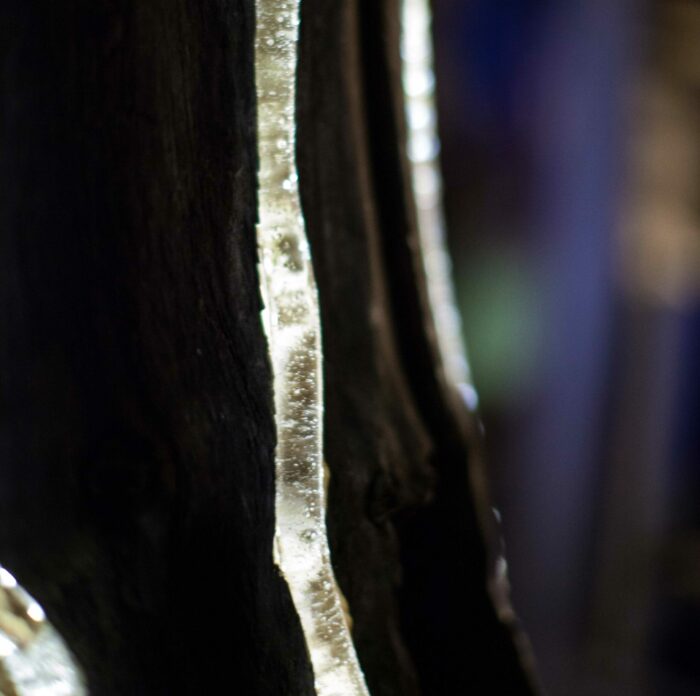 With those libraries in place, we were able to use our system of creative technology to visualise each unique heartbeat, reinforcing the heart as the source of creativity in all of us. The resulting rhythmic displays of light and sound pulsated in time with each heartbeat, creating an individualised visualisation of visitors’ unique creative hearts. 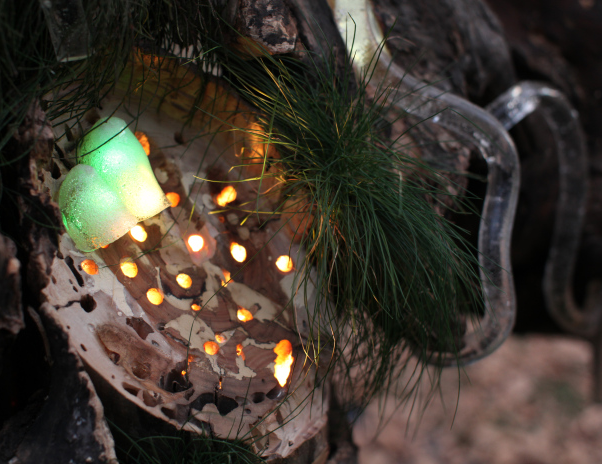 Adobe Heart Tree proved that creative experiences are always just around the corner. Initially launched for a week in Sydney’s Central Park, the experiential marketing activation drew a crowd of over six hundred people on its opening night to see first-hand how creative technology would translate their heartbeats into a generative, interactive artwork.

Throughout the launch week, the Adobe Heart Tree recorded and visualised over 3,571 audience heartbeats. The popularity and uniqueness of the experiential marketing activation also garnered significant media attention, including features from B&T, Campaign Brief and Herald Sun. After the initial launch, the interactive artwork was put on public display in Westfield shopping centres across Australia. It now resides at the Affectors Gallery in Sydney. 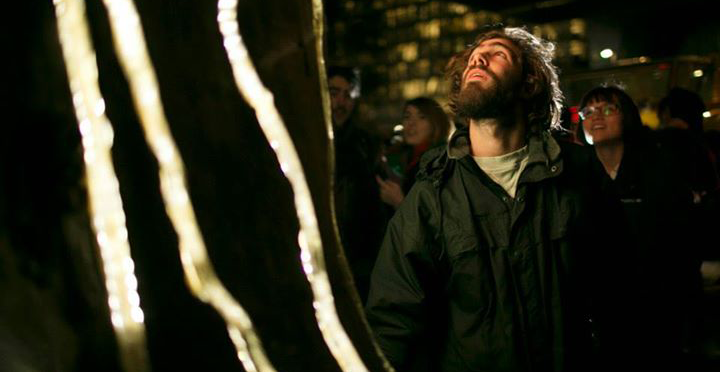