Real-time lead Jack Condon takes a deep dive into Anti-Game, an experimental art project he created with Liam Stephens for Fables from The Threshold. The experience uses the OptiTrack motion capture system and the Oculus DK2 to explore ideas of presence inside of a virtual environment.

Anti-Game is a simple experiment, parodying and analysing the relationship between audience and technology, audience and developer, as well as, developer and technology. It intends to subvert tropes within the video game medium in order to manipulate preconceptions of their experience in virtual reality.

Anti-Game places the player in a virtual reality environment that appears at the surface to be a simple maze. What makes the maze special in Anti-Game is that the player can only find the exit by walking through one of the virtual walls where they are confronted with a giant void where the player sees their environment no longer as a user but the same as a developer in a level designing environment. 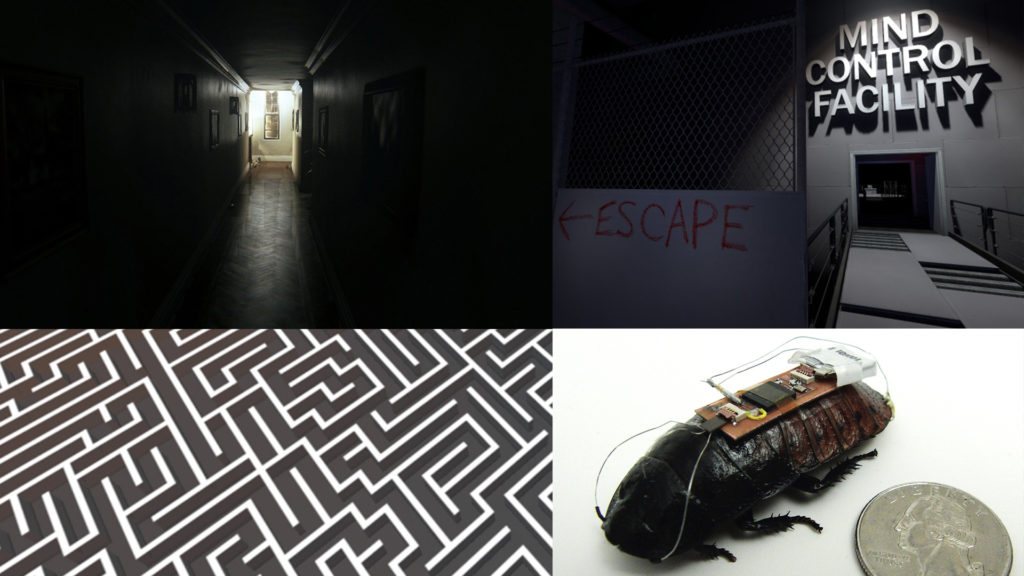 The experience itself was heavily influenced by games such as PT, The Stanley Parable and The Beginners Guide. Also, most notably, a real-life experiment to DIY modify cockroaches behaviour.

Our goals in creating Anti-Game

Fables From The Threshold was a good opportunity for us to work on a side project that allowed us to further the idea of video games in a fine art context whilst also pushing our technical skills.

It was important for us to use the OptiTrack motion capture system integrated with Oculus Rift and Unreal Engine because it’s a platform that’s new to us and we wanted to enhance our skills in this area. The idea was to develop this as a platform whilst making a really cool experience to show people the possibilities with this technology.

Technologies used to craft the experience

Anti-Game was achieved through the integration of the OptiTrack system. We used IR markers on the headset and made a plugin that grabbed the data from the OptiTrack software then reinterpreted it.

The nice thing about this solution is its cross-platform, meaning we could use it for the Samsung Gear VR as well. The HTC Vive makes this kind of application redundant through its lighthouse system, but the neat thing about the OptiTrack system is we can track anything, including multiple headsets. 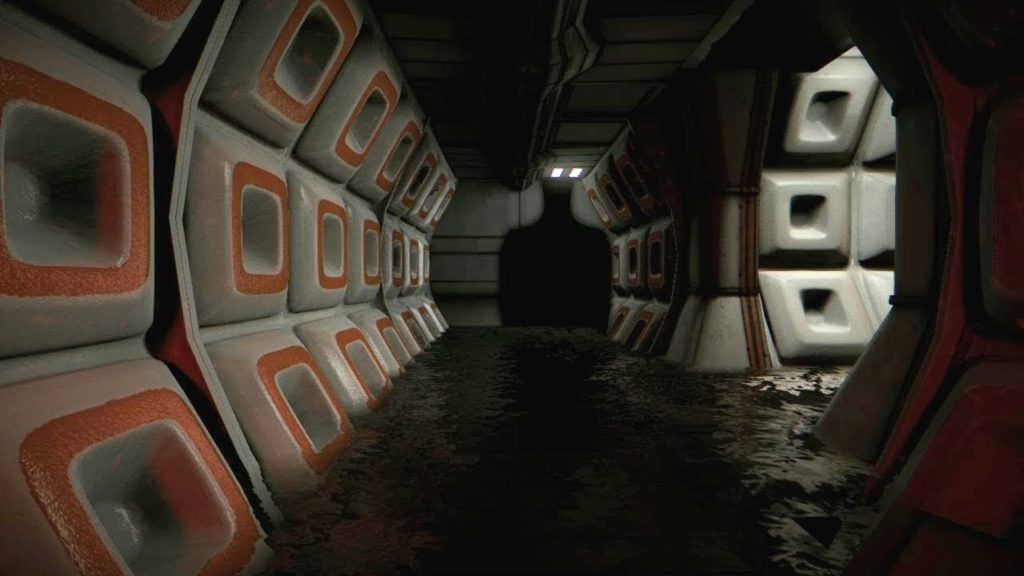 The Unreal Engine 4 was used to create the environment, spreading a lot of time on our materials to support vertex painting. The reason for this was we knew we wanted a brutalist level, but wanted to break up our concrete in areas. We made dirt masks as well as water masks. Vertex painting allowed us to paint in where we wanted to add detail. This technique was inspired by the indie game Caffeine who do a really good job of breaking up their long sci-fi corridors. 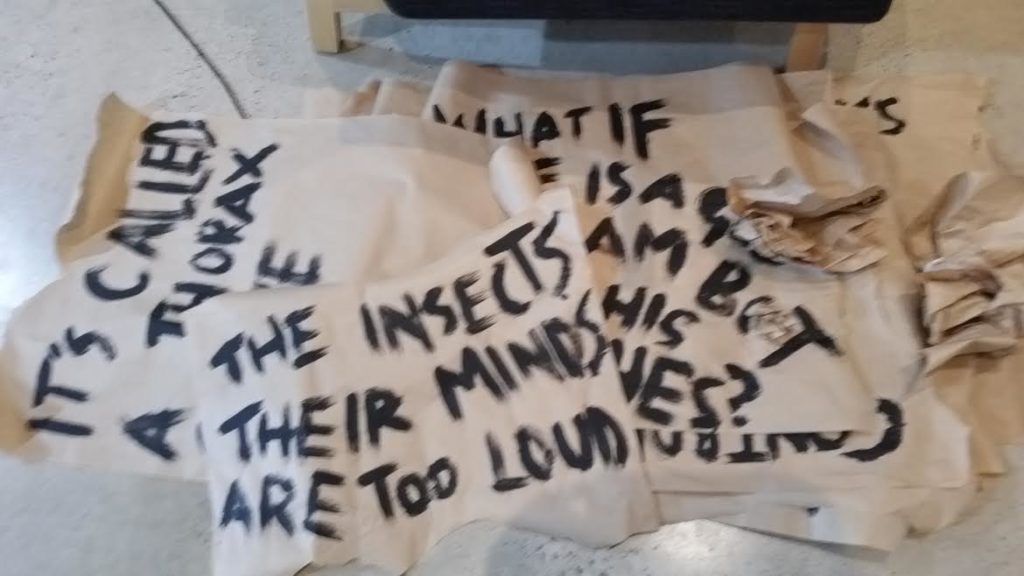 We also hand painted a lot of butchers paper for the decals. These decals were then scanned and applied as a mask to our decal material. The decal material had scratches and other deformations that added a ‘manic’ feel, but for us it was really important to hand paint in the words themselves to give a more human feeling. 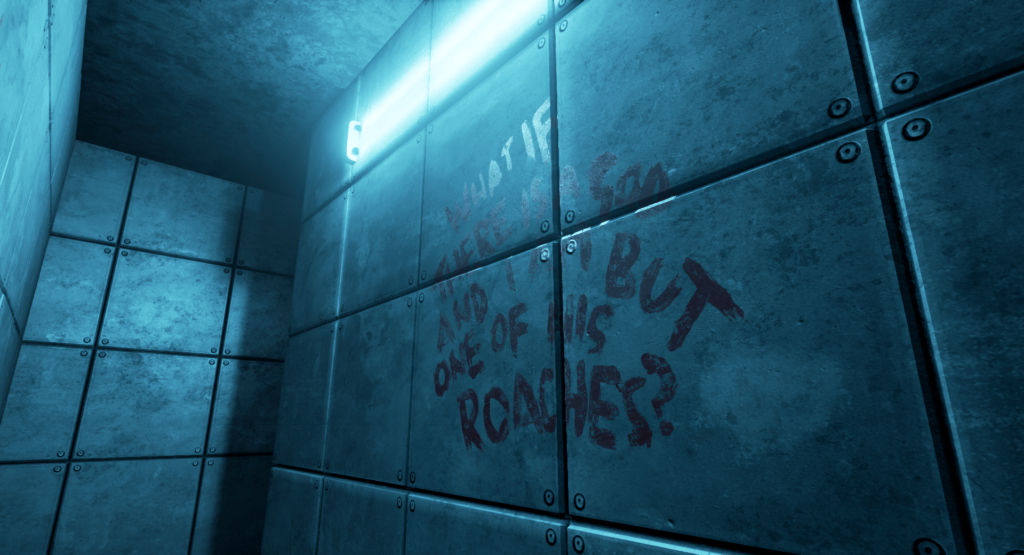 How could we improve on Anti-Game?

Whilst the story told by the decals was not the primary focus of the experience, it would have been nice to expand the interaction in some ways here. Our concept was to try and link the idea of roaches being modified via manipulating their antennas to the user’s behaviour being modified by the Oculus Rift. 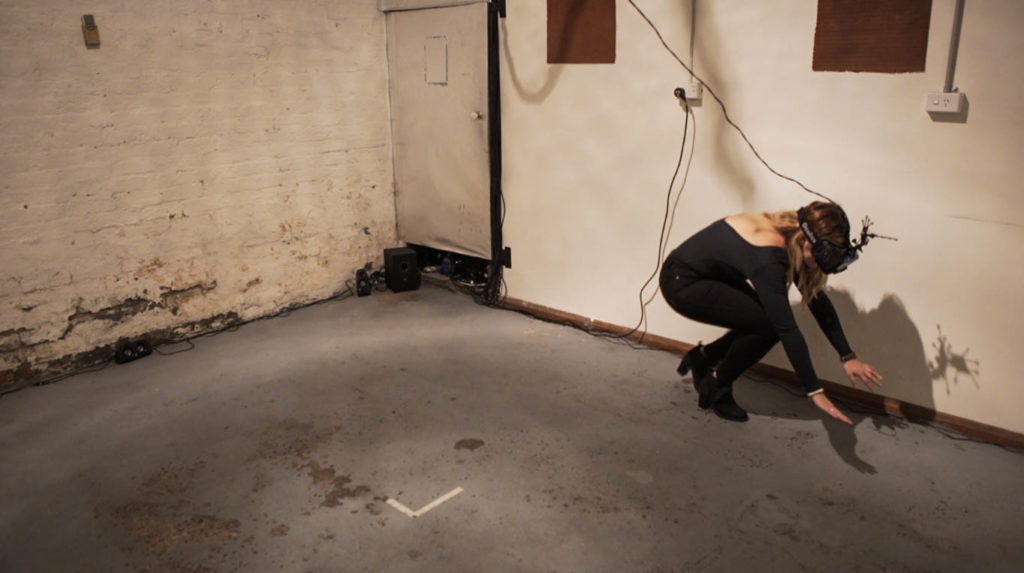 Both the user and the roaches only walk where they perceive there are no walls. But unlike a cockroach, the player has the ability to overcome the ‘game’ and walk through the walls to find the exit. I think this interaction could have been clearer, and our writing could have been much stronger. It was still fascinating to watch audience members interact with the world, but not enough people overcame the maze and this is partially a fault of the storytelling elements within the world.

What does the future hold?

The ideal platform for this kind of work is still the gallery environment, and that marks a lot of challenges, most of which, we have learnt from Fables From The Threshold. We will continue to make small isolated experiments that explore similar ideas, hopefully perfecting our storytelling skills with this strange new format.

Once we have enough experience, the dream would be to mash them all together. One of the major objectives for the future will be to release virtual reality from its ‘box’, by that, I mean free it up for users to walk through a gallery space not tied down to physical barriers such as tracking space. Our ideal scenario would be to turn the physical gallery space into a bunch of headsets people can put on and enter the ‘virtual gallery’ where they interact with another world, also isolated in different virtual landscapes but at the same subtly interact with one another. 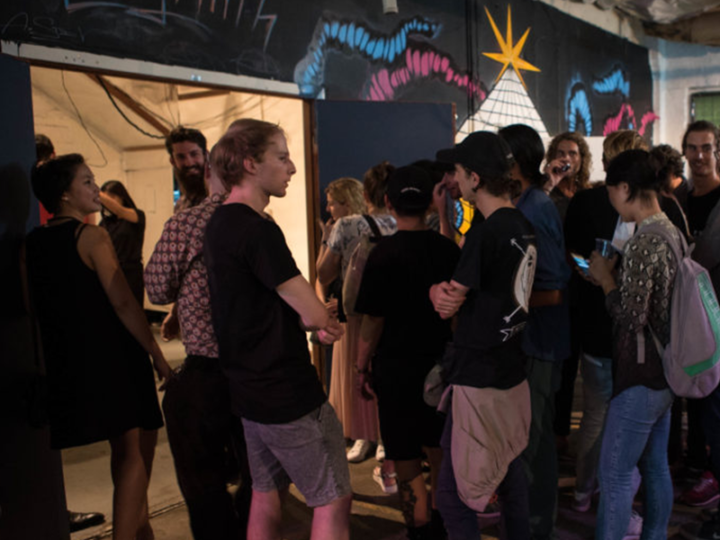 Fables From The Threshold