Remembrance Day is a time of memorial and reflection. For the 100th anniversary of the World War I armistice, we launched the Queensland Remembers website: a digital reflection pool filled with poppies containing the personal dedications of Queenslanders. Leveraging WebGL website design to create intuitive interactions, the site allowed over 1,300 users to share their personal stories of remembrance – stories you’re invited to share and add to as you explore.

The Queensland Remembers website was part of a larger campaign by the Queensland Government to commemorate the Anzac Centenary in 2018. At the core of this campaign was a huge public art installation. To create this artwork, thousands of people across the state attended community workshops where they created paper poppies to honour the service and sacrifice of servicemen and women.

This public art installation - and the 'Poppy Party' workshops held in over 300 communities around Queensland to create it - were the inspiration for the website.

Designed as an online extension of this physical artwork, our Queensland Remembers WebGL website aimed to amplify the impact of the offline campaign. By allowing Queenslanders to contribute personalised virtual poppies to a digital reflection pool, the site brought the campaign into the online world for countless more to experience.

In designing the actual look of the WebGL poppies, we went through a number of iterations. Initially, we were drawn to the idea of recreating origami poppies in the digital world. The act of folding and unfolding messages seemed like a perfect interaction for reflection and contemplation.

For the final design, we opted for a curved poppy to more closely align with those created as part of the offline artwork. While this choice meant users wouldn’t be able to physically fold the poppies, we did keep the idea of revealing the messages inside through animation, with petals separating, circling and reforming. 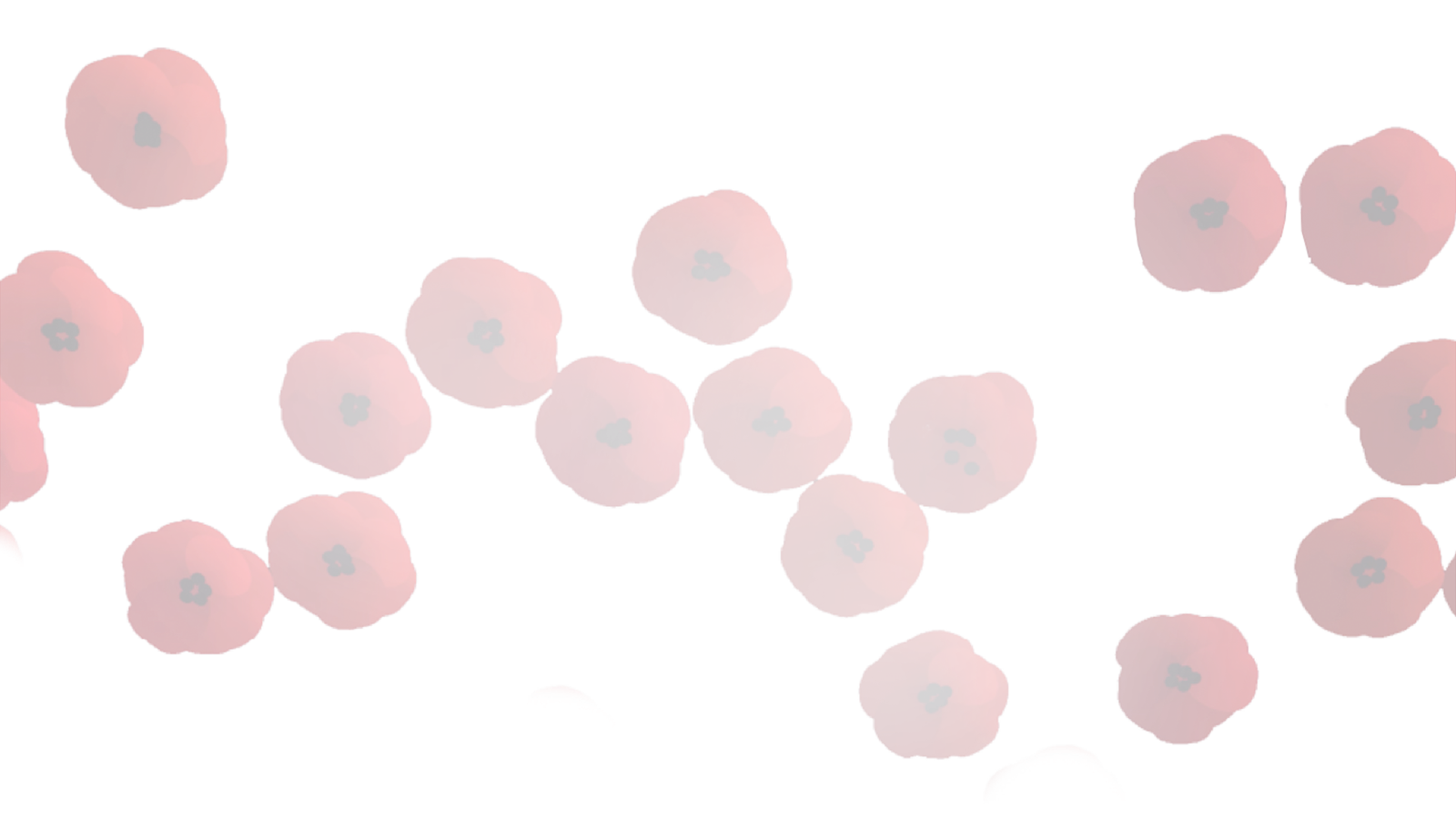 If you decide to dedicate your own poppy through Queensland Remembers, you’ll notice two options: select a pre-filled dedication, or personalise your own message. This very deliberate (and much iterated) choice deals with one of the site’s fundamental design problems: the paralysis of customisation. 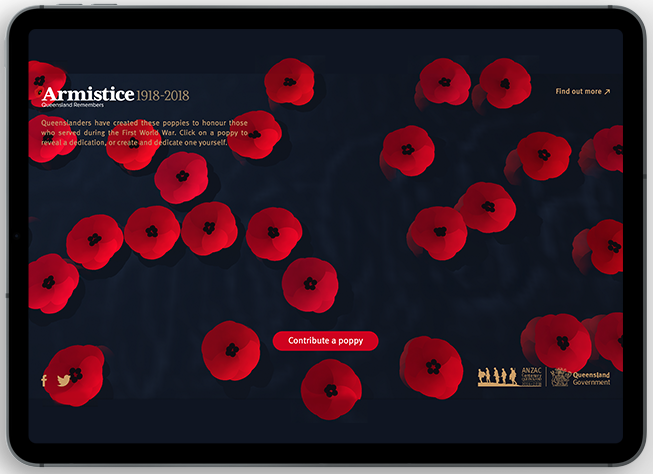 In an ideal world, all the poppies on the Queensland Remembers website would include personal dedications. The diversity and authenticity of these messages would create a much more meaningful experience of exploration. But we were keenly aware that forcing users to write their own dedication could paralyse those who were unsure of what to say. 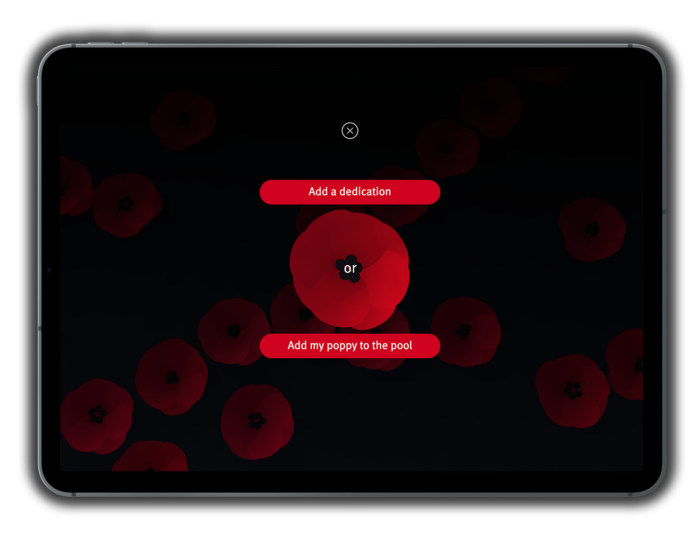 In the end, we decided that it was more important that everyone feel welcome to interact and commemorate than it was to force the inclusion of personal dedications. As such, we included an option of choosing pre-filled messages. That way, the WebGL poppies could be personally dedicated or cast into the pool without any customisation at all 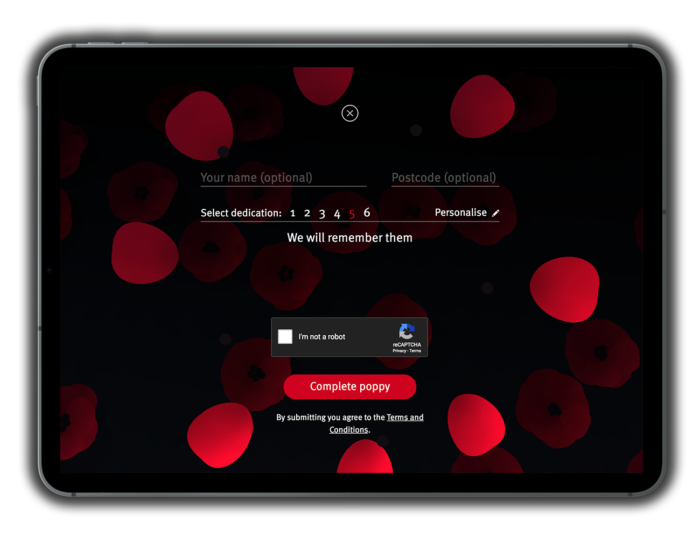 While pre-filled poppies were an important inclusion for the website’s user experience, they presented a conflict to our goal of encouraging meaningful exploration. We knew that the emotional potential of the Queensland Remembers site came from the personal, user-contributed stories. However, it would take time to collect those stories, especially when not every user would be contributing something personal.

To begin, the reflection pool was filled mostly with pre-filled, nameless poppies. Yet as the campaign progressed, a customised poppy ranking algorithm slowly replaced these default poppies with more personal stories of remembrance. 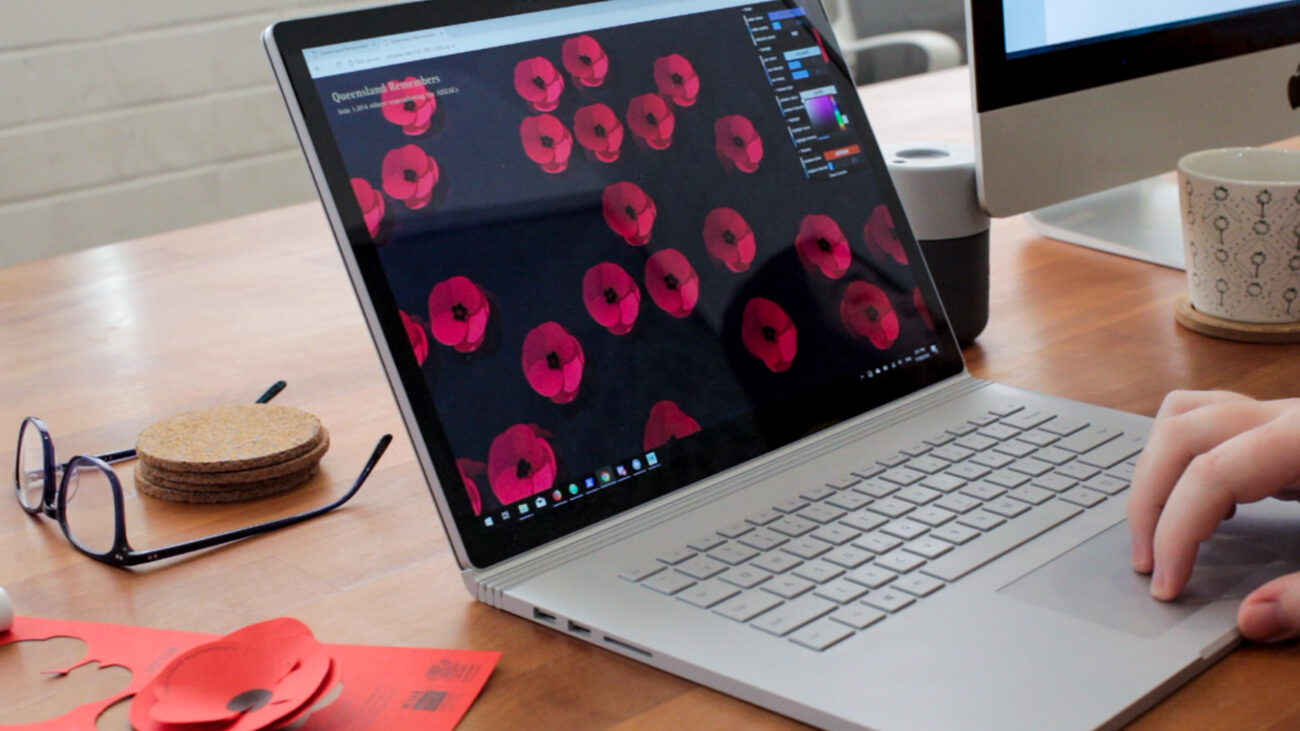 The contemplative feel of the Queensland Remembers website was largely driven by the flowing water of the digital reflection pool. We created the gentle water ripples through a low cost WebGL algorithm able to approximate the sort of wave propagation we see in real life, with a scalable computational load perfect for a website that would need to run on a diverse range of devices.

Meanwhile, the drifting motion of the poppies was achieved through a JavaScript port of the popular physics library Box2D, well known for physics-based iPhone games. Here, each poppy was a rigid body given velocity by scene-wide noise emulating the currents of a stream. The poppies followed their own path, sometimes bumping one another as they meandered across the screen.

Look a little deeper and you’ll even find a hidden interaction within the reflection pool itself. When users dragged a poppy or moved their cursor/finger across the pool, they were able to influence the behaviour of the water itself. Including this interactivity came from the idea of “one free interaction” – an action that has no functional consequence, but provides a moment of delight that can be repeated as often as desired.

During the month-long campaign leading up to Remembrance Day, over 1,300 poppies were created and submitted to the Queensland Remembers website. This included two VIP submissions from both the Premier of Queensland and the Governor of Queensland. The project was also featured on Channel 7 News, and has continued to receive poppy contributions from users all over the country. 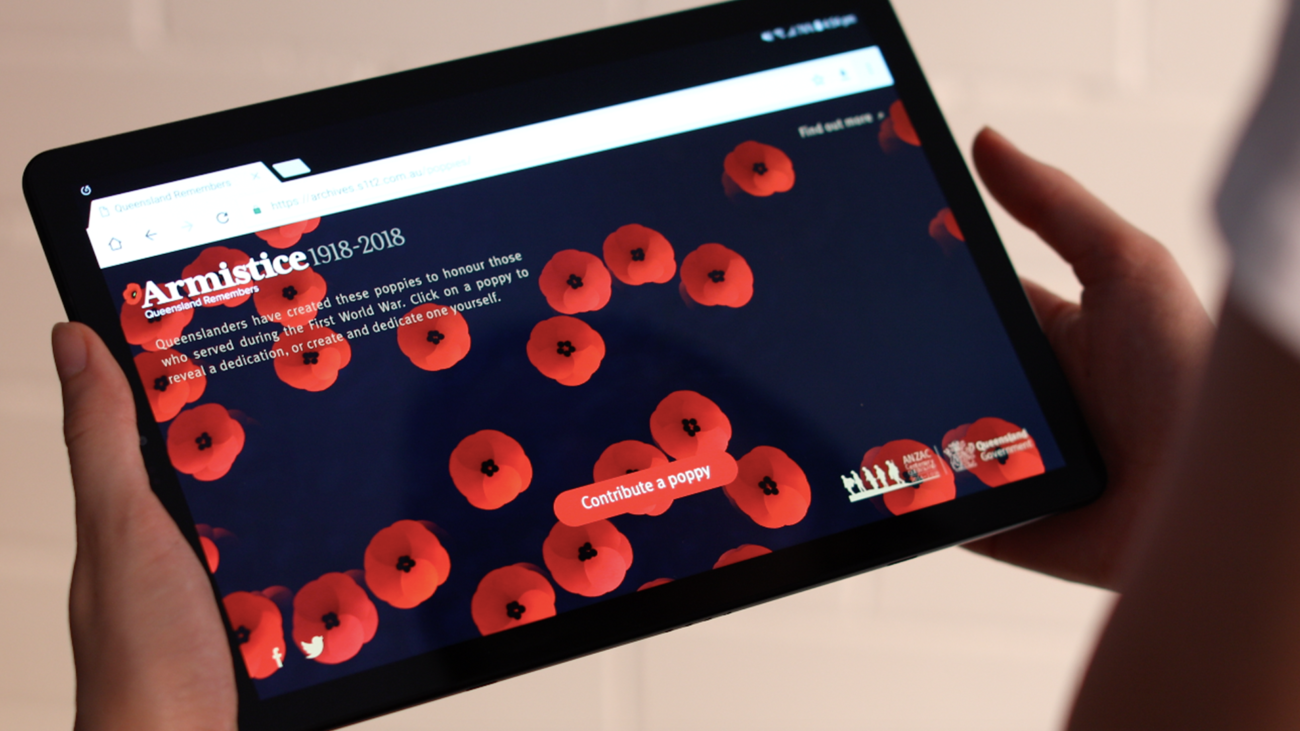